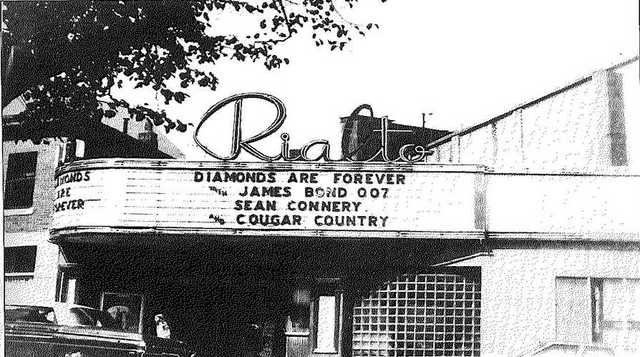 This theatre in the Roslindale neighborhood of Boston has been alluded to on other pages of Cinema Treasures and on some local nostalgia websites discovered via Google. I am posting it, although not a neighborhood resident or even a Massachusetts resident. I did, however, see a movie there once. The theatre used to be visible from Washington Street as one drove to or from downtown Boston.

It was built in 1915 and was operated by Charles J. Gorman as the Roslindale Theatre. By 1929 it had been renamed Rialto Theatre

411 South Street? Google Maps puts that address in the middle of the Arboretum.

Yeah, I don’t understand that at all; at first I thought it was the residence of Charles Gorman, the theater’s manager. (Maybe he lived in one of the trees).

Here’s the Rialto in 1924, listed as C.J. Gorman’s Amusement Enterprises.

I remember driving by in the mid-1970s after they tore it down, and being amazed how small the footprint of the building seemed to be.

Ron Salters – I just found this on a Roslindale Historical Society web page: “There was Rand’s Corner, and then there was the library where the Rialto Theatre is now, but that was moved, that was only a wooden structure. And there was also a movie place where we watched silent movies.” This silent movie house must have been the one at 4255 Washington street. The building was one in from Corinth street, but there’s no mention of a theatre on the fire insurance map. Perhaps just a small hall used for showing silents.

Yes, in the 1905-1915 period, it was common to rent small neighborhood halls and exhibit movie shows in them.

Regarding the exterior photo posted above, I don’t know what year Sean Connery in “Diamonds are Forever” was released, but the exterior of the Rialto obviously had a drastic make-over and modernization, because its appearance is very different from the exterior photo taken in May 1941 for the MGM Theatre Report.

I remember going to the Rialto theater in the 1940s. Back then, before we all had TV, the serial movies on Saturday afternoon were the highlight of our young social lives. For 12 cents, and later 14 cents, we could watch a full movie, several cartoons and a serialized story, usually a cowboy movie. These were so important to most of us that we bent whatever rules were imposed on us so we could attend. In my case, my mother had decided I should take violin lessons on Saturday afternoon from the minister. I had no choice but to do so, but when it came time for the Christmas recital — the reason no doubt the minister was contributing his time for my lessons — I intentionally blew it so badly that I was thereafter excused from the violin lessons and could resume my beloved Saturday afternoon movies. How we cheered on the good guys and booed the bad guys in those films! It is wonder we did not blow the place down, as well.

Also, I had my very first date at that theater. I was in the fourth grade and so was she. I forget what we saw, but the whole thing made me feel very grown up. A very pretty little girl with dark brown hair — I remember her name and face to this day, 65 years later (!). The next year we moved to West Roxbury, and a different theater, but I will always cherish my memories of the Rialto Theater.

Although it gives the location of the proposed theater as Washington Street, the mention of Charles J. Gorman as the owner, and the approximate size of the building being correct, suggests that this item from The American Contractor of November 13, 1915, could be about the Roslindale/Rialto Theatre:

Issues of Christian Science Sentinel published in 1919 make reference to a November 16 lecture being held at “Gorman’s Theatre, South and Washington Streets, Roslindale.” Boston police records from January, 1919, include this item:

“On the application of Charles J. Gorman, President, Leslie A. Woollard was appointed a Special Police Officer for duty in and about the premises of Gorman’s Theatre located at 4199 Washington street for the year ending March 31. 1919.”

A police report from July, 1919, noting applications for permits to be in effect until August 1, 1920, included this item:

From this, it looks as though the address 4199 Washington Street was changed to 709 South Street sometime between January and July, 1919. It is also clear that this house was in operation as either the Roslindale Theatre or Gorman’s Theatre as early as 1919, and probably 1918, which makes it much more likely that it was the project that The American Contractor said was about to get underway in November, 1915.

From the photo of the Rialto, it looks as though an adjacent, triangular lot on South Street was added at some point to create a new entrance building for the theater. That building does not appear to be part of the theater as it was shown in the 1924 map that was linked in an earlier comment.