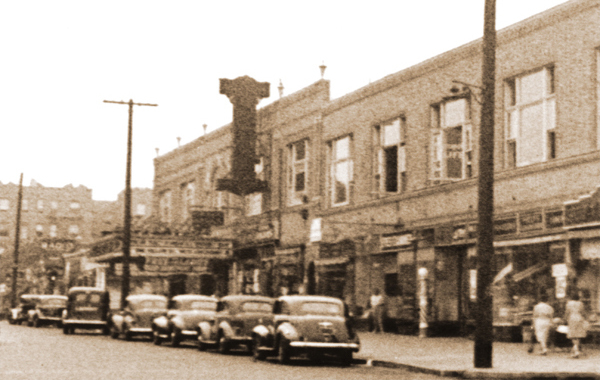 Opened in 1927, the Allerton Theatre was equipped with a Kramer theatre organ. In 1946, John Eberson’s firm undertook alterations to the building.

The theatre was later converted into a triple screen cinema in 1979 and continued in operation until 1993.

Whoops, sorry — that link didn’t seem to work; go to http://maps.live.com, put in 744 Allerton Ave, Bronx, NY as the location, and choose Bird’s eye View; you’ll see the building on the south side of Allerton.

I spent many hours at the Allerton Theater in the fifties; along with the Globe and the Pelham, it was one of the three places we saw movies in the neighborhood. Most memorable: Land of the Pharoahs in 1955.

When I moved into Parkside Projects as a kid in 1973 I saw “The Exorsist” at the Allerton. It was my first time in the theater and it was huge. I spent my teen years watching movies like “The Taking of Pelham 123”, “Serpico”, the original “Texas Chainsaw Massacre"My friends and I were there every Saturday, two movies and a cartoon for $1.25 (kids). I also remember the lady at the consession stand. Short old lady with a beehive hairdoo. She never smiled. I also remember sneaking in the rear emergency exits on Cruger Ave. My friends and I would pry open the doors and run into the theater during a show on a Saturday afternoon. Light would flood into the theater and we would all spread out into the seats. (Yea, I was one of those retards) As per the above posts, yea, after they changed it into a triplex it just wasn’t the same. The theaters were long and narrow, like a large hallway. I have many fond memories of growing up in the Bronx in the 1970s and the "original” Allerton Movie Theater will always have a place in them.

When I was a kid in the 1950s' the price of admission was 26 cents. For this price on a Saturday afternoon, you got 2 movies, 5 cartoons, & of course, coming attractions. It was a great place to spend the day. They were very strict regarding behavior & wouldn’t hesitate to toss you out. You weren’t allowed to bring in what we called “polly-seeds” since the shells would stick to the floor. They also had sweepstakes of a sort when they gave out dish ware etc.

The Payless store was the entrance and lobby. The CVS is the auditorium

I’m confused.. Is the Allerton & Barnes the same theatre?? I remember seeing Class of 1990 w/ a date when I was in H.S then went across the street to a Chinese Restaurant. It was on Allerton, a couple of blocks from the 2train Station

If anyone is interested, my short story “Bezillgo Versus The Allerton Theatre” has been published in the Grinning Skull Press anthology, “Attack! of the B-Movie Monsters: Night of the Gigantis. It is available through Amazon at http://www.amazon.com/ATTACK-B-Movie-Monsters-Night-Gigantis-ebook/dp/B00GXMWVII/ref=sr_1_2?ie=UTF8&qid=1419461816&sr=8-2&keywords=Grinning+Skull+Press

I saw many a movie in that theatre from Joseph Losey’s “Boom” to Tim Burton’s “Batman,” and a lot of other films in between. I always went to the first show when films opened there on Wednesdays during the summer. It wasn’t a whole lot of money back in the late 1960s and early 1970s, but I had a wonderful time seeing all those films on the big screen in my neighborhood.