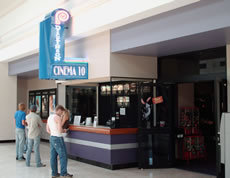 General Cinema Theatres opened the Penn Square 8 on May 19, 1988. It was taken over by Hollywood Theaters on August 15, 1997. Two more screen were added in 2001 and Hollywood Theaters moved out in September 2001. Dickinson Theatres renovated the theatre and it re-opened on November 1, 2002. It was taken over by AMC in November 2012. The Penn Square 10 is located within Penn Square Mall. It shows first run films, but lags a bit behind Oklahoma City’s larger theaters in amenities.

What is the current status of this theatre. DIckinson is either closing or selling off their screens, and are not doing any upgrading. Also was this originally a General Cinema house?

This is most likely the the theater in Oklahoma City that this article mentions Dickinson shall be closing as part of its bankruptcy reorganization.

Please keep me updated with developments on this theatre. For some reason I am not getting updates. Thanks!

Joel, when the site was renovated, getting updates requires that you now “subscribe” to the theater(s) which interest you. See below.

AMC is taking it over with power recliners and stadium seating.

Here is an article that confirms the AMC takeover and provides more detail about the planned renovations.

AMC is now in charge and the theater is listed on the company’s website.

The AMC Penn Square 10 Opened On May 19th, 1988 As A General Cinema. Dickinson Theatres Took It Over Years Later And Then AMC.

On January 18th, 2020, Shots Fired Occurred At The Theater’s Entrance Of The Penn Square 10.

The Penn Square Shopping Center opened theatre-less in 1960 with anchors John A. Brown and Montgomery Ward. The shopping center was enclosed in 1982 and given a major renovation doubling floor space in 1988 including a new second level, food court and a new General Cinema 8-screen interior theater. RTKL Associates was the architect for the project.

General Cinema had entered the Oklahoma City (OKC) market in 1982 with the Quail Springs 6. In 1988, it added three more 8-plexes in the Brixton Square, Penn Square Mall, and Crossroads not Square all launching in 1988. The Penn Square opened on May 19th, 1988.

At the 15-year leasing option of the Quail Springs 6 in 1997, GCC not only bailed there but totally left the OKC market. General Cinema dropped the Penn Square Mall location along with its Brixton Square 8 Quail Springs, and Crossroads 8 locations on August 10, 1997. Hollywood Theaters picked them all up as of August 15, 1997. Hollywood added two screens to make it a 10-plex not long before dropping the location in September of 2001.

Dickinson spent $350,000 on the location reopening there on November 1, 2002. Dickinson closed at the end of a 10-year leasing arrangement in 2012 with AMC taking on the venue in November of 2012. AMC invested $1.6 million in adding recliners and a new look concession area with its new look completed in May of 2013. The theater closed for the COVID-19 pandemic along with the other AMC locations on March 16, 2020. It reopened August 20, 2020.