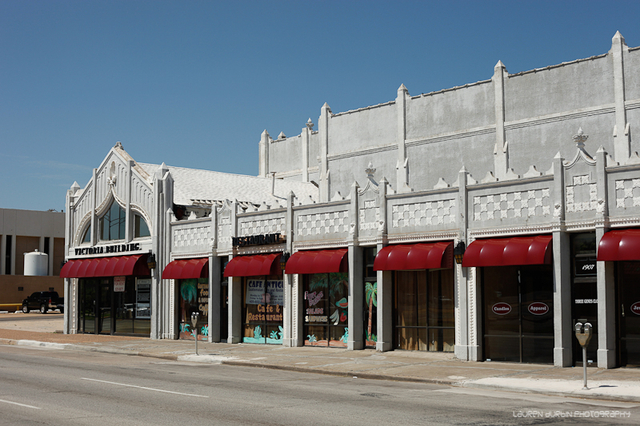 The Victoria Theatre was opened July 4, 1928 with Pola Negri in “Three Sinners”. It was equipped with a Barton pipe organ which was opened by organist I. Newton Yates. In January 1950 it was briefly renamed Vogue Theatre when it was taken over by a repertory theatre company. The Victoria Theatre was still open as a movie theatre in 1956, but had closed by 1957. It was converted into a TV studio for KTVO - Channel 25.

Check out the web site for Oklahman Archives to see great images of the Victoria Theatre. A fantastic architectural drawing of the Gothic auditorium is shown January 29, 1928, and an exterior photo can be seen July 4, 1928.

Here is an article dated 1/8/50 from the Daily Oklahoman:

‘Claudia’ to Be first Stock Company Show at the Vogue

EXTENSIVE redecoration and refurnishing is under way at the
Vogue theater, formerly the Victoria and still later used as a church, which returns soon to the entertainment field. The neighborhood playhouse at Classen and NW 17 opens January
24 with a stock company presenting six shows a week, drawn from
the established hits of recent years. First offering of The Piper Players will be “Claudia,” long a favorite with theater goers. Succeeding productions will be of equal caliber.

The Piper Players, a company of 20, have had wide experience In
stage presentations on both coasts and are now on a successful road
tour of the midwest. Charles Freeman, general manager of The Cooper
Foundation theaters here, has booked them for an extended stay
on the theory the city is ready for legitimate theater again.
Price scales have not been decided, but they will be in the popular
price range.

Here is an early notice about the Victoria Theatre, from Motion Picture News of October 28, 1927:

“WORK is expected to be begun this week on Oklahoma City’s first suburban theatre. The new theatre will be built on the corner of Eighteenth street at Classen Blvd., and will cost around $100,000 for the building. L. M. Ranch, a local real estate man, is constructing the building. It will be operated by the Victoria Theatre Company, headed by L. M. Karchmer and A. H. Emenheiser. The equipment for the theatre will cost approximately $75,000.”

Beautiful building. I wish this theater would re-open showing classic movies such as the Castro Theater does in San Francisco. Sure there would be an audience for this being that 23rd St and the Plaza area has experienced a revival. The storefronts deserve better, too. Clarence Castleman Bulger, architect of the Victoria Theatre, began his career in 1903 as the junior partner in the firm of C. W. Bulger & Son, after completing his BA degree at the University of Chicago. His father, Charles William Bulger, died in 1922.

Clarence Bulger was best known for designing churches, he and his father between them having completed more than 75 of them in at least 20 states. They also designed many impressive houses for well-to-do clients, and what is considered the first skyscraper in Texas, the 15-story Praetorian Building in Dallas, completed in 1909. Clarence Bulger died in 1956.