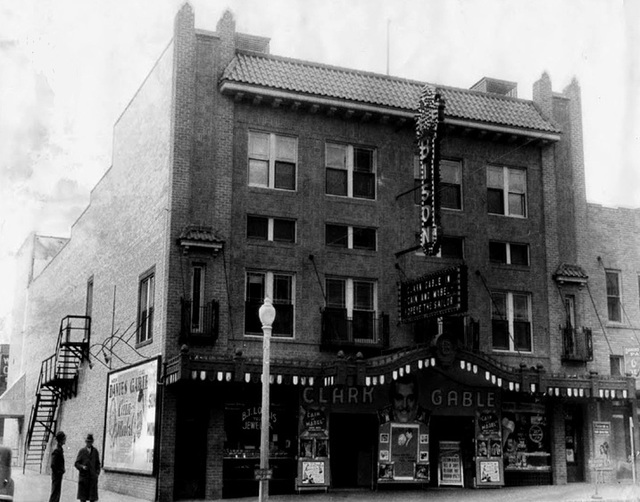 This theater is not listed in the 1975 Shawnee phone book.

The Bison Theatre was located on the corner of Main Street and Philadelphia. It was built by Griffith Theatres, later called Video Independent Theatres of Oklahoma City. The theatre seated over 1000 people originally. It had a domed ceiling with twinkling lights to resemble stars. The theatre had a working stage and could accomodate traveling stage shows and entertainers as well as movies. In 1947, with the opening of the Hornbeck Theatre in Shawnee, the Bison was changed to a second run policy. In 1954 Jones Theatres, Inc. partnered with Video in the Bison’s ownership. The Bison was a victim of television in the mid-1950’s when it closed. The V-shaped marquee on the Bison was moved to the Ritz Theatre in Shawnee during a major renovation of the Ritz in 1966. The building was sold and first became a western wear clothing store, later a church and now an antique mall. The stage area is still intact in the antique mall.

On below site, historic photo of the Shawnee Bison Theatre is mistakenly listed as the one in Oklahoma City.
In search field type in word “theatre”, then press enter -
View link

Seems OHS corrected their error. Both the Shawnee Bison Theatre and Enid Aztec (minus balcony) were sister houses, designed by Carl Boller. To compare images, on above post type in name “Aztec”, “Bison”, or “Esquire”.

This is what the neighborhood around the old Bison Theatre looks like these days,
View link

Ray, In your post on 10-8-07 you said the Bison in Shawnee and the Aztec in Enid “were sister houses, designed by Carl Boller.” In my research on the Aztec I haven’t been able to verify the identity of that theater’s architect. May I ask the source of your information? Thanks for your help!

The Film Daily of October 21, 1927, reported that the Griffith circuit’s new Bison Theatre in Shawnee had been set to open between October 16th and 18th.

The only theater in Shawnee that is attributed to Boller Brothers on David and Noelle Soren’s list of known Boller Theaters is the Misson Theatre of 1927.

The May 1, 1946, issue of The Film Daily has a death notice for Shawnee architect Gates Corgan and attributes the design of the Bison Theatre to him:

“Shawnee, Olka. — Gates Corgan, 68, prominent Shawnee architect and contractor who from 1925 until his retirement two years ago was architect and contractor for the Griffith Amusement Co., died here. He built the Bison here in 1926 and built other theaters in Oklahoma and Mid-western states. He is the father of Jack Corgan of Dallas, well known Southwestern theater architect.”Another item in the same magazine said that Gates Corgan had designed more than 100 houses for the Griffith Amusement Company.