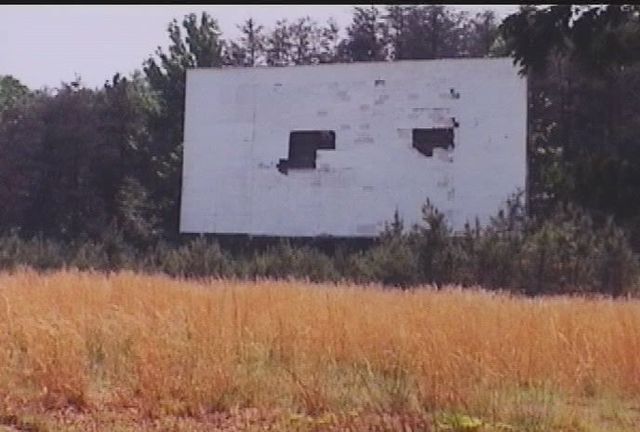 My recollection of the end was very different than NaD’s. You see, I owned the drive-in in 2001 and still do today.

I could share all kinds of horror stories about the last “managers” of the place. Unless NaD were lying on their box office reports, the drive-in wasn’t doing much business at all during it’s short 6-week season in 2001. It wasn’t even clearing film rental minimums. It only drew over 100 cars ONE WEEKEND in six. The last weekend it drew less than 90 cars. Hardly, a “packed” lot by any stretch of the imagination.

As far as I could tell the only successful project the “managers” completed was getting a satellite dish hooked up so that they could watch TV. We won’t even get into the missing money, important documents, equipment and keys. And we won’t talk about the reason that the ceiling caved – the fact that the electricity and water was left on. I was lucky the “managers” didn’t burn the place to the ground.

Guess this owner learned an important lesson too: never hire 21-year old slackers with credit problems as managers. What they don’t take, they tear up. Talk about a “sour taste” in one’s mouth ….

After losing over $180,000 in two months on the Keysville Drive-In and with no end to the bleeding in site, I did what any sensible person would do. I chose to stop the bleeding.

The closure of this drive-in was painful in the extreme. It was my teen years drive-in. I saw “Jaws”, “Coal Miner’s Daughter”, “The Longest Yard” and “Saturday Night Fever” there. I loved the place and wanted to save it. I spent more than I had on it and hoped for the best. What I encountered was a perfect storm of bad luck: horrible managers, expensive repairs that I had to take care of long distance while shuffling two jobs & a family and little to no local support.

I still have not given up on one day reviving the drive-in. But unless I can oversee the operation personally or find a competent manager, I’ll let it sit. No way … no how do I want to repeat the horror and pain of 2001.

This is a rare,1st person acount that goes right to the core of your soul.As someone who passes this place on a regular basis,this gives more poignant reality to the sad sight.I do not doubt that this place could be viable again.He could draw people from the sw side of Richmond like crazy with a little publicity.A big spread in the Times-Dispatch,etc.,would do wonders-but the BIG prob.is the people running an operation.The lovely Hull is a prime example.That is a labor of love.

The Keysville Drive-In is opening next Friday, May 29th,2009! We stopped by there today and the new owners seem to be really excited about it. They are going to start with a triple feature and normally have a double feature. $6 per adult, $3 for children under 12. They are even putting in a playground. It’s great to see the place shaping up. Their website is www.keysvilledrivein.com

A feel good story in these down times. I wish them well.

I was THRILLED to watch the clean up take place,see the re-opening.There are a few,very few,closed drive ins that COULD reopen,if the care,interest and money were availible.Nostagia is the key to get something like this to work.I haven’t noticed any publicity in Richmond about this going on in Keysville.

I think RICHARD BOAZ is operating the MONETTA TWIN DRIVE IN in Monetta,S.C.

According to their website the Keysville Drive-In is closed again.

Anyone heard if they will reopen the Drive-In? Who owns it now? What are other options to seeing a movie other than driving to Richmond or to Farmville? A good drive-in is classic Americana fun! This is a shame!

According to The Fayetteville Observer, the Keysville was reopened (in 2009 I guess) by Mark and Jennifer Frank, but they sold it to focus on a more recent purchase, the Raleigh Road Outdoor Theatre in Henderson NC.