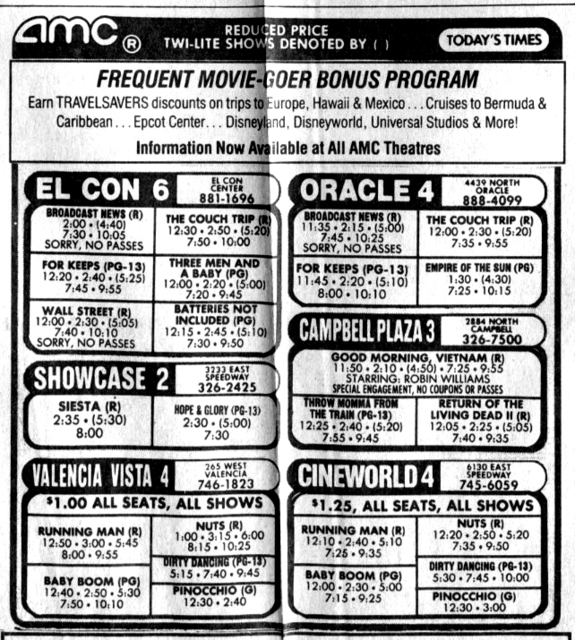 Opened as Showcase Luxury Cinema on May 29, 1969 with Maggie Smith in “The Prime of Miss Jean Brodie”. It was a 600-seat single screen theatre operated by Lippert Theatres. The Loft Cinema shows first-run independent, foreign and documentary films. Also shown are “Late Night Cult Classics” such as “The Rocky Horror Picture Show” which is shown every Saturday at midnight. The Loft Cinema has a 500 seat main theater and a smaller 125 seat upstairs theatre, which opened in 1970 as the Penthouse Cinema. In 2014 a third screen was built to the east of the theatre, and a fourth screen is planned.

Here’s a link to one of its early newspaper ads:http://webcache.googleusercontent.com/search?q=cache:EVb0mBS4ntwJ:newspaperarchive.com/us/arizona/tucson/tucson-daily-citizen/1970/08-22/page-50+&cd=2&hl=en&ct=clnk&gl=us

The upstairs screen was originally a separate theater known as the Penthouse Cinema.

Here’s an old promo for the Penthouse:http://webcache.googleusercontent.com/search?q=cache:SpXuO81XZ2QJ:newspaperarchive.com/us/arizona/tucson/tucson-daily-citizen/1970/11-20/page-24+&cd=27&hl=en&ct=clnk&gl=ca&lr=lang_en

B-movie producer Robert L. Lippert was a widescreen expert having produced low-budget Regalscope films during his movie producing days. So it was little surprise that when he started Tucson’s Showcase Luxury Cinema, it was a single-screen roadhouse theatre. Lippert’s Transcontinental Theatres Circuit would hit 120 theaters but the Showcase was his first in Tucson and #67 in the San Francisco based chain. The $350,000 Showcase launched May 29, 1969 with “The Prime of Miss Jean Brodie.” Its curved 22x55' screen seated 600 patrons in continental loge seating and was going to make every effort to book 70mm films. The theater appears to be architected by Tucson’s Terry Atkinson though similar to other Transcontinental theaters around the country of this period has some differences likely incorporated by Atkinson. It featured a beautiful double-storied glass front leading into a spacious high-ceiling and open lobby area. Well prior to the opening, the Showcase was advertising a road show of “Oliver” that was two months away from opening.

“Oliver’s” road show run was 2.5 months and replaced with the popular, “Easy Rider” and would have the road show of “Dr. Zhivago” and a three-month run of “Hello, Dolly” during its first year of exhibition. In the battle for clearances, Lippert had to bid $50,000 for “Dolly” and said he would never fight / bid that much for a clearance again despite the film’s success.

As the booking of a single-screen film was high risk, the theatre had some losers in 1970 and opted to add a second screen called the Penthouse. This was the circuit’s practice all over the country as they would transform their high-ceiling entryway lobbies into a lobby housing a 175-seat auditorium above which was reachable by stairway. Similar setups with in Lawton, OK, Chattanooga, TN, and Richmond, VA were placed in those luxury roadshow houses. To make life easier, the theater used an automated Cinemeccanica Victoria 18 projector that could handle 2.5 hours of film on a single reel.

On July 28, 1972, the Penthouse was renamed and the theater marketed as the Showcase Cinema 1 & 2. The Penthouse/Cinema 2 concept paid dividends. Among the theater’s most successful runs was “Fiddler on the Roof.” It ran as a road show for 13 weeks and would have left the theater were it not for the renamed Cinema 2. “Fiddler” switched to the Showcase 2 running 17 more weeks for a profitable 30-week run. “The Sting” beat that playing 40 weeks between 1973 and 1974. “Earthquake” in Sensurround was a revelation. But beginning in 1975 with new competition and other chains more eager to pay high for clearances for “Jaws,” “Star Wars,” and other films, the Showcase drifted as “the place” for big films.

Under AMC, the theater would become the Showcase 2 moving to art house fare much of the time. The New Loft closed on Fremont and would move here in 1992. Ten years later, it would become a non-profit membership art house still called The Loft adding a third screen in 2014.

Lived in Tucson for 3 years and went to see their midnight showing of “The Big Lebowski.” Loved the whole experience.

I’ve been to the Loft twice for their 70mm showings. Saw Tron and West Side Story. Both prints were in great shape. Hopefully they will add a better sound system to their main auditorium after the redo the seating. Hope they play The Sound of Music, Patton, and Brainstorm in 70mm.

Here’s the link to a new historical article about large format and roadshow presentations at this and other Tucson cinemas.

According to this advertisement, TM operated it before AMC did. https://www.newspapers.com/image/163766994/

Circa 1977 photo added credit Tucson Citizen, from below link. Courtesy Save the Signs Facebook page.