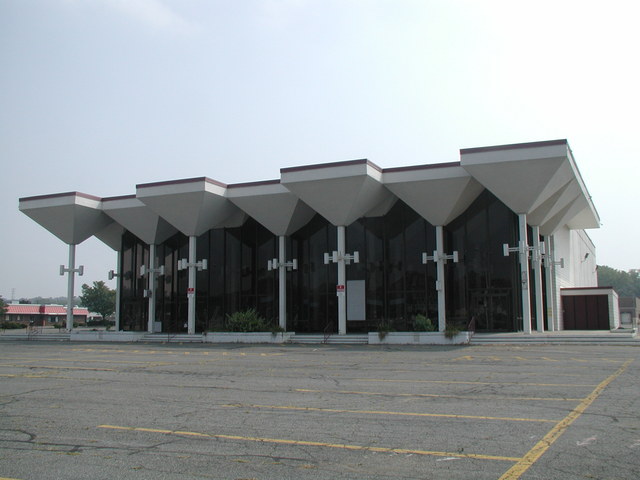 Opened in 1968 by E.M. Loew Theatres, the Palace was a classic single-screen, 1960s-era theater that featured a large lobby with a huge glass facade. In the mid-1970s, Sack Theatres twinned the 1,000-seat auditorium.

In the mid-1980s, the Palace was swallowed up by its larger neighbor across the street, Showcase Cinemas, which divided the movie house into four auditoria. The Palace 1-2-3-4 sign was later replaced with one for Showcase and the theater was last known as the Showcase Cinemas West Springfield 16-19, with the other fifteen screens across the road.

The original Showcase Cinemas was torn down to make way for a new National Amusements megaplex, while the former Palace remained true to its minimally raked seating.

The theater was not in the future plans of National Amusements, though, and was closed in 2002. In 2006, the theater was demolished. A Raymour & Flanigan furniture store now sits where the Palace once stood.

The Palace’s large lobby, exterior design, and glass facade were the only examples of this era in theater design anywhere in the Springfield area.

This house was built by E.M LOEW Theatres around 1968 as a 1000 seat house. SACK THEATRES twinned house around middle 70’s doing a very good job, both sides had traveler curtains,left side maintained the dual 70mm equipment.

Showcase Theatres then quad-ed the house and it was still a good operation. Closed in 2002.

It is still standing there abandoned. The property looks decrepit with weeds growing through the cracked pavement. I always felt that this facility would make a great performing arts venue compared to the struggling Amherst, Victory and Bing area theaters.

Though suffering from rather typical late 1960’s decor, this theatre had one thing in it’s favor, and that was fantastic 70mm presentation. As already noted, the original equipment went to the left side auditorium. The screens were tiny in comparison to the original 120 degree curved Todd-AO style screen, but the excellent 6 track sound remained, providing a lot of joy to audiences until the complex closed in 2002.

I saw a listing for Showcase 1-11: I’m guessing that was the combined total between this and the former Showcase across the street (before it was replaced with the 15-screener across the street which is arguably one of the highest quality mutliplexes I’ve ever been to). So that had 6? and this one had 1, 2 and 4 at diffrent phases in its life. I also saw that the one across the street opened as a twin, there is a photo in the Cinema Treasures book.

John, the rather frenetic history of these theatres goes something like this. Before it was rebuilt in its current configuration, Showcase Cinemas across the street from the Palace totaled ten screens. The first section was the original two screen complex, built in 1965. A couple of years later, around the time the Palace opened across the street, another building containing a third theatre was added by Showcase. Shortly after that yet another building with two more screens was added. Many of these theatres featured 70mm projection, but only theatres one and three had curved screens.

In 1975 theatres one and two were twinned, and less than two years later the original theatre five (now number seven) was twinned. By 1984 the two remaining large theatres were also twinned, bringing us to the total of ten screens.

In the mid 1980â€™s the Palace was purchased by Showcase and it was subdivided a second time, making it four screens (Showcase Cinemas 11 â€" 14). After the main complex was rebuilt with the amazing total of 15 screens, the former Palace briefly became its final name; Showcase Cinemas 16 â€" 19.

Unfortunately I have the unhappy task of announcing here that this once lovely 70mm road show house is no more. A good friend informs me that he drove buy the former Palace earlier this month and itâ€™s been torn down. Nothing was in the local newspaper or on the local TV news, and no reports have been made as to what will become of the land.

The location will become a Raymour and Flanigan Superstore sometime in the near future. Such a waste!!

Glad to add something here; not much written, The Showcase used “THE COTTON CLUB” premiere to hold a Benefit showing for the American Cancer Society.March 1985.Boxoffice.

This opened on March 22nd, 1968. The grand opening ad has been posted at this theatre’s photo page.

I remember going to see “Close Encounters of The Third Kind” in ‘77 back when it was still the Sack Palace.