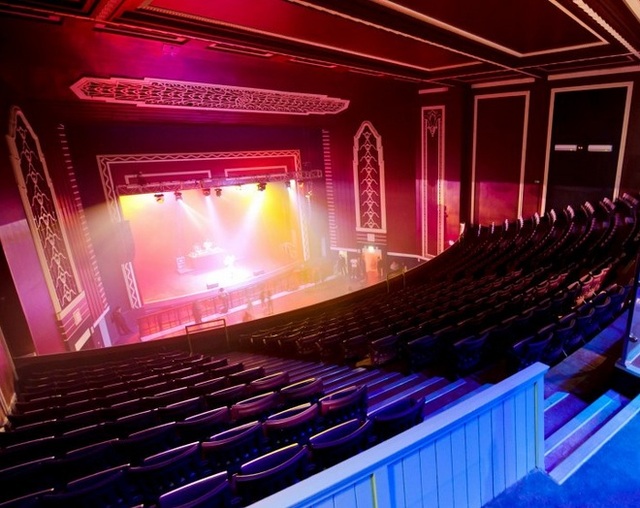 Located in the east London district of Stratford. Opened on 1st August 1896 as the Borough Theatre and Opera House with a stage production of “Henry IV (Part I)” by William Shakespeare. The theatre seated 3,000, was designed by noted theatre architect Frank Matcham, it was decorated both externally and internally in a flamboyant Jacobean style.

Known affectionately as the ‘Drury Lane of the East’, due to its location in Stratford in the East End of London, it attracted top name stars and productions. From 1910 it was altered to the plans of architect J.M.H. Gladwell to enable films to be screened as it operated as a part-time cinema by the Frederick’s Electric Theatres circuit.

On 4th March 1933 it was closed and sold to Essell Cinemas who engaged architect George Coles to transform the ageing theatre into a modern super-cinema. Externally the corner entrance was re-faced into a sleek modern design, leaving the remainder of the exterior as built. Internally George Coles removed all vestiges of Frank Matcham’s interior and created a 1,889 seat Art Deco style auditorium with seating in stalls and circle. A Wurlitzer organ was transfered into the cinema that had originally been installed in 1927 in the Almira Theatre, Cleveland, Ohio, USA.

The building re-opened as the Rex Cinema on 5th November 1934 with Claudette Colbert starring in “Cleopatra” and Gracie Fields starring in “Sing As We Go”. The Wurlitzer 2Manual/7Rank organ was opened by organist Sandy Macpherson.

In September 1935 the Rex Cinema was taken over by Associated British Cinemas (ABC) and they operated it until it closed on 11th January 1969 with Elvis Presley starring in “Stay Away Joe” and Kerwin Matthews starring in “Battle Beneath the Earth”. It was converted into a bingo club which remained until 1974 when it briefly became a cinema again for a few months, screening Asian movies. The building then lay empty and decaying for 21 years becoming the biggest pigeon loft in London!

In 1996, a local businessman Malcolm Campbell put forward plans to restore the building and recieved funding from local and Government regeneration funds. The original stage house and dressing room block were demolished and a new high-tech unit was built. The rest of the building was magnificently restored to its 1934 condition and served as a multi-use venue for concerts, live performances and a nightclub serving a capacity of 2,500 patrons.

Sadly it was closed after a concert by Bone Thugs-N-Harmony on 12 October 2007 and the venue owners went into receivership. Taken over by a new management, it was refurbished and re-equipped, and re-opened as a concert venue on 29th August 2009 with ‘Drum & Base Carnival-In the Sun Reunion’, now named the Rex Music Arena. The venture was short lived, and the building was closed and only occasionally used for special events since the end of 2009.

In late-October 2012, after a refurbishment, it re-opened as Sync, a 2,500+ capacity bar/restaurant/nightclub, which presents stand-up comedy, concerts, ‘secret’ cinema events, boxing matches and special events. It had closed by 2016. The building is owned by Newham Council.

Further history and photographs of the Rex here:
View link

A photo of the Rex here:–

Vintage photographs of the Rex Cinema and its Wurlitzer organ, plus the current home of the organ:
http://www.ukwurlitzer.co.cc/1719.html

Not looking too good…

A souvenir programme dated 5th Nov, 1934 is held by the Kent MOMI Museum, in Deal, Kent