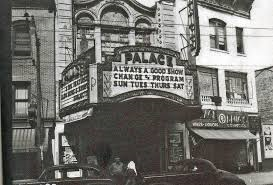 Opened as the Bijou Theatre on November 14, 1888 It was operated by Frederick Proctor. In 1906 he formed a partnership with B.F. Keith and the theatre was renamed Keith & Proctor’s J.C. Theatre until 1911 when the partnership was dissolved and it became B.F. Keith’s Theatre. On October 9, 1920 a Wurlitzer organ (opus 354) was installed. It was renamed Palace Theatre on October 12, 1929. By 1950 it was operated by Liggett-Florin Booking Service. It was still listed as operating in the 1955 Film Daily Yearbook.

Nice photo on page 19 of Arcadia Publishing’s “Jersey City: 1940-1960”. They state that this theater is now a drug store named Palace Drugs.

Here is a photo from Google maps:
http://snipurl.com/5ayy1

From the google aerial photos, the Palace Drugs building is clearly too small to have been a 1,000- seat theater. Also, Palace Drugs is 172 Newark Ave. It’s possible that the low one-floor building to the right of Palace Drugs was where the entrance/lobby was for the Palace Theatre. It would be a fairly long lobby leading back to where there is now a parking lot. Looks like this theater is probably demolished.

Spectrum is correct. The Palace Drug Store was next door. The theatre and drug store were operating at the same time. There was also a restaurant next to the theatre on the other side. They had a griddle in the window with hot dogs on it all the time. Would stop for a dog or two. I saw Elvis Presley in “Love Me Tender” @ The Palace. It was a neighborhood theatre at the time for a working class area of Downtown Jersey City. The theatre was between Jersey Avenue and Eire Street. Newark Avenue was a thrieving four or five block shopping area at the time. It boasted three different “Five and Dime” stores: F.W.Woolworths, H.L.Greens and W.T. Grants. There was a small dep’t store called The Wonder Store. When Mussolini declared war on the USA, the owner fired all the Italian Americans employees. My mom was furious and told the owner. She never shopped there again. When we would pass by in the 50’s she would tell us the story. My mom was actually ashasmed of Mussolini. But, was annoyed that he did this to innocent Italian Americans. A phobia which was showing it’s ugly head at the time. In most cases this prejudice was metted out to Italian, German and Japanese American citizens.
The area suffered a downhill slide. In the late 50’s and 60’s. It is now a shadow of it’s former self. Our family dentist was down the block Dr. S. Grochow DDS. He was a very nice and caring man. He treated us from children until adulthood when he retired. He saw my sister and I grow up. His office was on a triangle at Newark Ave and Eire St. Here is somemore history of The Palace and it’s neighbors. I grew up on York Street about five blocks away. Michael

Here is a brief article about Kieth & Proctor’s Theatre in Jersey City which was published in the June, 1907, issue of Gaillard’s Medical Journal:

“One of the astonishing incidents of a busy theatrical season is the wonderful big shows that are being offered every week at Keith and Proctor’s Jersey City Theatre at prices that would shock a Broadway ticket seller to wit: only ten and twenty cents at matinees and ten, twenty and thirty cents evenings. Consider for one minute just what is being given in return for these small prices: In the first place every comfort that is possible to provide in a twentieth century theatre is herewith supplied. The house is the newest to be erected in Jersey City and it is as complete in its luxurious appointments as any house in the big metropolis of Manhattan. Indeed there are few houses in New York that can vie with Keith and Proctor’s Jersey City Theater in point of architectural elegance and completeness of detail in its interior furnishings. Smoking rooms are provided on every floor and a matron is waiting on every floor to minister to the wants of ladies and children. In this respect Keith & Proctor’s appeals with especial significance to Jersey City families for it is a rigid rule of the management that mothers with their young ones shall be given every consideration at this house. The summer schedule of prices was instituted a short time ago and since the adoption of the ten and 20 cent matinees the place has been packed. An additional feature is the distribution of beautiful and costly gifts of cut glass and jewelry as prizes in a ticket-drawing contest which has been the means of crowding the house. Every purchaser of a matinee seat is given a numbered ticket and during the performance the winning numbers are drawn from a wheel on the stage by a young girl chosen from the audience and the lucky possessors then and there claim their prizes which are delivered immediately to them. With a thoroughly cooled interior, a magnificently appointed theatre and the distribution of free gifts beside a splendidly arranged program, it would be difficult to figure how it is possible to offer anything more attractive to Jersey City at such small prices of 10 and 20 and 30 cents.”The Palace Theatre was originally called the Bijou, and was in operation by 1904, controlled by Frederick Proctor. After Proctor merged his interests into the Keith & Proctor Amusement Company in 1906 the house was remodeled and renamed Keith & Proctors. When the partnership was dissolved, the house became B. F. Keith’s Theatre.

By 1918 a 300-seat theater called the Bijou Dream, under the same management as B. F. Keith’s Theatre, was opened in the former Hotel Criterion building next door at 172 Newark Avenue. That building is still standing, but the original Bijou that became the Palace has been entirely demolished.

This opened as Majestic on September 16th, 1910 and as the Palace theatre on October 12th, 1929. Both grand opening ads in the photo section.