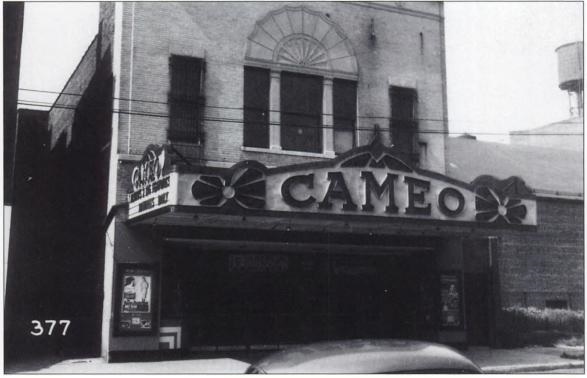 Open since at least November 9, 1926 when a Wurlitzer organ (opus 1502) was installed. This theatre is listed as operating in the 1951 Film Daily Yearbook.

This was a Fox theatre doing live shows in 1929:

Looking at the view of 223 Ocean Avenue on Google Maps, it looks like the theater building is being used to sell office furniture. The adjoining business is Peckman’s Pharmacy, which may be using part of the old theater building for storage. I don’t think 1485 people could fit in the small furniture building.

This picture suggests that the theater was converted to a bowling alley at some time.

The current store in the front is selling office supplies. The drugstore appears to be gone now, -the theatre’s storefront is the only one left on this side of the block – all else is parking. But you can see the auditorium in back. people would walk straight back and turn turn right to enter the auditorium. From the air it looks big enough to seat at least 1,000. There is a small window in the side wall of the auditorium so it may be gutted inside. Then again they may have simply punched a small hole in the wall. The side that’s the back of the lobby is still complete – no windows.

i sold newspapers on the corner, in the sixties, and early seventies. the theater was alreay a bowling then.

The Cameo Theatre in Jersey City was set to open the following night, according to an announcement in the January 16, 1927, issue of The Film Daily.

I saw my first movie there “Davy Crockett”

The “Theaters in Construction” column of the February 3, 1926, issue of Variety had this item:

C. H. Ziegler was also the architect of the Orient Theatre in Jersey City.