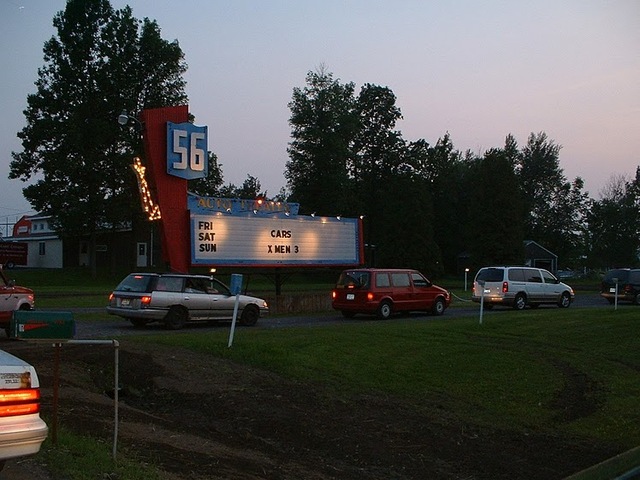 The 56 Auto Theatre opened on July 22, 1955 with Kirk Douglas in “20,000 Leagues Under the Sea”. Most importantly is is still open and shows first run movies seven nights a week.

This was called the “56 Auto Theatre” when it first opened on July 22, 1955. The drive-in is located on Route 56, south of Massena, which is in the Thousand Island region of New York State. The movie shown on opening night was Disney’s “20,000 Leagues Under The Sea.”

This is Massena’s newest Drive-In. How about the Sunset Drive In? It was near Massena Center off the road that later lead to Eisenhower Lock area. My parents and I went to see a movie there in the early 1950’s and to our dismay, the screen had blown down the night before. I wanted to just cry. So I did. (just kidding about the crying part) Ray , formerly of Winthrop NY

I wish I knew Mike’s source, because I couldn’t find much useful info about the 56 in my reference books.

Jeff Szot of JS Cinemas owns the 56 now. When did he buy it? According to North County Now, “Szot said he bought the drive-in sometime in the early or mid-1980s.” I’ll bet it was from some guy named Leger.

Also opened with “The Olympic elk”.