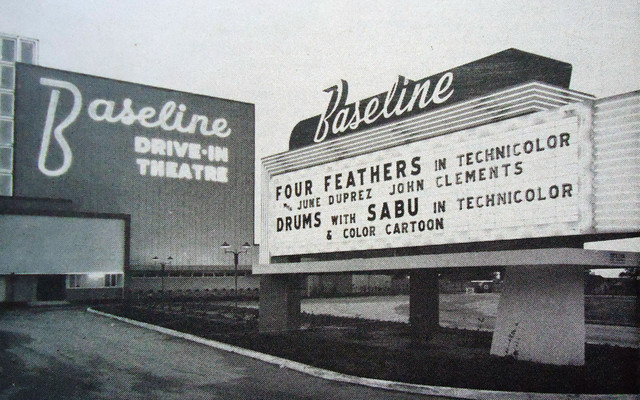 The old address when it opened was 1785 Baseline, Highland, CA. The Baseline Drive-In opened October 15, 1948 with Lucille Ball & Franchot Tone in “Her Husband’s Affairs”. It had a capacity for 750 cars and outdoor seating for 300 walk-in patrons. This was Pacific Theatres flagship theatre for San Bernardino county, and yes, it was a drive-in. Inside the screen itself were housed the district offices.

Palm trees had once surrounded the entire drive-in, and the peaks of the San Bernardino mountains could be seen behind the screen. There were neither speakers nor speaker poles; the sound was broadcasted and patrons would tune-in on their car radios to hear the movie. It was closed May 11, 1989 with “Dream Team” & “Fletch Lives”.

Sadly, the massive screen and the offices it housed caught fire sarted by vandals on July 27, 1989, and that was the end of this treasure.

Was it known how the fire started?

When was the fire?

What is there now?

Call me a Doubting Thomas, but I find it difficult to believe the drive in opened in 1948 without speakers and speaker poles.

That fire occurred the evening of July 27, 1989 just after 8:30 PM, reportedly caused by vandals.

Were the fire vandals ever arrested and charged with arson and trespassing(and breaking and entering and theft?)?