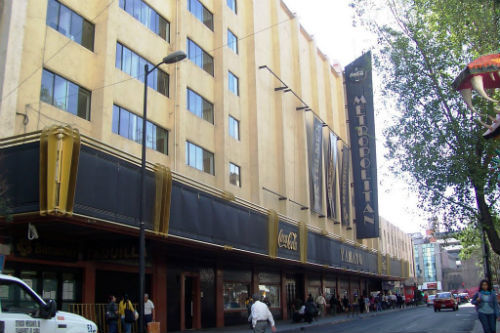 The Cine Metropolitan opened on 8th September 1943 with the Argentinian film “A Los 16 Anos” (1943) starring Maria Duval and Alicia Barrie. The architect was Pedro Gorozpe E. with interior decorations by Aurelio G. Mendoza. Seating capacities were later reduced and given as 3,627 in 1955 and 3,005 in 1971.

I believe it closed as a cinema in 1985 and was renovated in 1995, re-opening on 18th December 1996 as the Teatro Metropolitan, a live show venue staging mainly rock concerts.

The Cine Metropolitan was aquired and operated by the Rank Organisation of the UK in December 1957. It was a great success for the company as they were the distributers of Walt Disney releases throughout Latin America at that period of time.

I have to say that the paintings on the walls of this theatre are very beautiful. The artist, who moved to the USA (California), also produced many paintings as I found out by chance at an exhibition I happened to be at in Pasadena, California sometime during the 1970’s. I soon as I found out that Mr Mendoza was the actual artisit that painted [the paintings] at the Metropolitan I bought two of his paintings one was an ‘Arizona desert scene’ ($1500) and the other was titled ‘Serpent of the sea’ which has a lady riding a serpent (great piece), I paid just $1200! I wish I would have bought more!! I have since found out during a trip to Mexicao that Mr Mendoza also designed and made ‘La Ofrenda’ which is an offering to the Virgin Mary (go to: View link or to: View link PLEASE if anyone knows how I may contact the artist let me know…there is so little known about this great painter and try as I may I am unable to find much out even with the advent of the internet! Many Thanks! Sam

He learned to paint scenery with the Tarazona Brothers, masters of painting from Valencia, Spain.

In Mexico City, he painted for several theaters, including the Palace of Fine Arts.

Feeling that he had the capacity to do architectural projects, he entered the academy of San Carlos in Mexico City. Under the guidance or Mr. Lino Picaseno y Cuevas he in a short time, was able as a draftsman, to collaborate with architects and building engineers and Later was the General Director and Artistic Designer of the mulitimillion dollar Metropolitan Theater in Mexico City. Some of his outstanding works in this project were the oil paintings that adorn the theater each of these paintings measures 8' x 12' (some pictures are being exhibited here) in addition, he painted the asbestos curtain in the Alameda Theater and two 10' x 30' paintings in the Bucareli Theater one for the Jai Alai building etc …

Outside Mexico City in Chihuahua, Chuahutemoc, and Juarez City, he designed and built the Plaza Theaters.

Among the buildings and private residences that were designed by the artist, are several commissioned for an Ex-President of the Republic of Mexico.

The Kessel Mansion in Polanco, Mexico, which is especially noteworthy because its advanced design is a good example of his vision and willingness to experiment.

At the insistance of his sons, Brunik and Alexander, he is presenting some of his works for view to the public.

Mr Mendoza is continuing to paint and expects to open a one man show in the near future. His paintings range in size from 8" x 10" to 5' x 10 ‘, already in the works is a trilogy of paintings measuring 5’ x 25 '

“This is as quoted from a flyer that I obtained from a draftsman’s set of shelves from a home being emptied in Pasadena 2006. Also contained therein was correspondence from a "A. Mendoza” 4320 Berkshire Av. Los Angeles, CA 90032 from December 10th 1979"

Here is a link to a picture of a large painting I have in my collection. Desert Scene by Aurelio G. Mendoza. Anyone who is interested can contact me. Great use of light, he truly was a master.
View link

May I see a picture of the other Mendoza paintings in your collection?

historian,
I only have the one painting by Mendoza. It’s quite large and very beautiful. View link
I too would love to see other examples of his work.
Dan (zboard at charter.net)

My name is Alexander T. Mendoza II nephew of the late Mr. ADG Mendoza.
He was a good artist, I have many photos of his works but no actual paintings.
I would be very grateful if anyone that has any, and I mean any, of his paintings would sell them to me as our family would like to keep as many as we can in the family. If you know of anyone that has any please also let me know.
Please contact me at or please call me at 626.590.5252.
Thank you

Here is a 1983 night photo:
http://tinyurl.com/yebfkcw