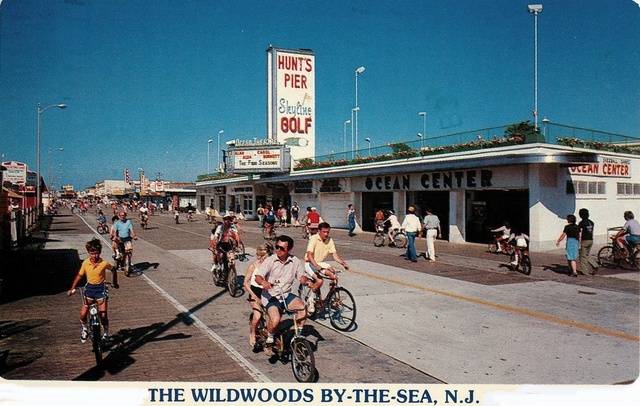 Opened in 1965, the Ocean Theatre was twinned in 1985. One of the last theatres built by Bill Hunt before his death in 1970. It was still showing first run movies until at least 1990. It became a pizza restaurant and by 2016 is in retail use.

Is this theatre located between Poplar and Juniper Streets? If so, then it must have been designed by Lee & Thaete Associates.

I remember the summer of 1984, saw “Ghostbusters” here, I think one of the last years it was a single. Twinned for the following summer, if memory serves me.

A color photo of The Ocean Theatre’s marquee in 1971

I miss this theatre, as well as the Shore Twins a few blocks away. It just doesn’t seem the same in Wildwood anymore without them.

Spent a few weeks in Wildwood in the 60’s with my Grandmother and my two brothers, I remember seeing “My Fair Lady” and “Thourghly Modern Mille”. A very beautiful theatre. You don’t see theatres like this anymore.

Regarding my November 2, 2007, comment in which I linked to a Philadelphia Buildings web page attributing the Ocean Theatre to an architectural firm called Lee & Thaete Associates. I’ve only just discovered that the Lee in Lee & Thaete was theater architect William Harold Lee. His partner in the firm, which was formed in 1964, was named Walter Frederick Thaete.

Philadelphia Buildings also attributes the Liberty Theatre at Cape May, New Jersey, to Lee & Thaete Associates (this was a remodeling job), though Cinema Treasures currently attributes it to Willam Harold Lee alone. Lee died in 1971, but the firm continued to operate under the same name until 1983.

Opening header needs to be updated. The theatre was twinned in 1985 and was opened until at least 1990 if memory serves me.

I grew up in Wildwood and knew Mr. Hunt and his son Bud. Mr Hunt owned all the movie theaters in Wildwood and Hunts Pier. He was a friend to Walt Disney. The Ocean theater directly across from Hunt’s Pier was obsolutely beautiful. Opened during the summer months seating was by reservations only. First movie featured, “The Sound Of Music”. Entering into the theater you were greeted by men and women dressed in black and white and they handed you a booklet from the featured film. I still have the movie tickets and the movie booklets.In the early 60’s a featured movie would play the entire summer. It was a beautiful theater with two stage curtains. Interior lights were gold and green and air-conditioned. Hunt’s Pier was the only amusement pier that had (light green) concrete to walk on. In the early 60’s many celebrities were enjoying the rides on the pier. Mr. Hunt was an eldery man who also owned a coffee shoppe on the corner beside Hunt’s Movie theater on Atlantic Ave and a restaurant on the opposite side of the theater. During the fall in the early 60’s on a Saturday afternoon (when the tourist left town Mr. Hunt would close all theaters except the two on Atlantic Ave)some of my grade school friends and I were standing in line to pay 15 cents to see a matinee of The Three Stooges and a Walt Disney movie, when Bud spoke to us saying “Boys and girls thank you for being so patient we will be opening the theater in a few mintues”. After the doors opened and we bought popcorn and candy, Bud walked out on the stage and said “Boys and girls you have been so patient, we have a surprise for you”. What a surprise it was! The original Mickey Mouse Club walked out on the stage, we were all given Mickey Mouse hats and we all sang Disney songs. Those years were filled with great memories for a child. It was the “hayday” of the motel era, the boardwalk, the shops were unique and Sportland Pool located at Twenty-third Avenue in North Wildwood was one of a kind. It had two high diving boards and two smaller diving boards, the deepest end was 12 feet deep. Concert Hall located on the boardwalk at Montgomery Avenue offered free Monday night concerts. During the 50’s and 60’s the beach was not as wide as it is today, the tide would reach the far end of the amusement piers. Most of all the original stores on the boardwalk are gone including many fabulous (neon) motels. I remember the shopping stores on Pacific Avenue: Mr Reminders, Alan’s (men’s clothing),Martha Shop, Newbury’s, Woolworth’s and Murphy’s, Jackson’s Pharmacy. During the early 60’s the biggest thing that they sold at the pharmacy was “English Leather” mens cologne very popular during President Kennedy’s administration. During Christmas season the American Legion would have a party for the kids which included ice cream, cake, movies , a large stocking filled with fruit, nuts, candy canes, and a present from Santa. As a child, I collected motel postcards, boardwalk postcard and many collectables from Wildwood I have kept today. When David Cassidy came to Wildwood Concert hall (newly built on Montgomery and Ocean Avenue),I sat in seat 1 and recorded the concert in the early 1970’s. My sister and I would go swimming with Bobby Rydall in the early 60’s at the Sun Tan Motel down the crest owned by Charly and Helen.