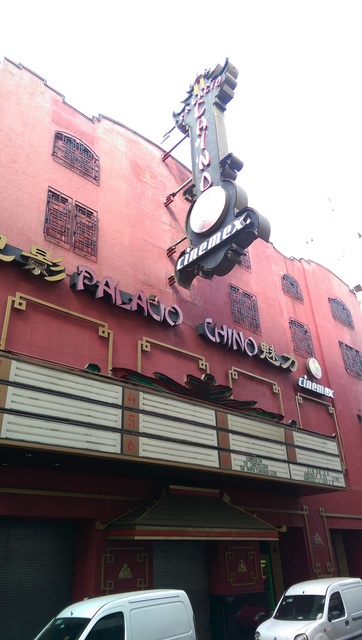 The fancy Palacio Chino opened in march 29, 1940. It used the shell of a former ball court, whose space was sufficient for a big movie theatre. It was the only one built ever in Mexico in chinese style, but unlike the Grauman’s Chinese, the interior was of the atmospheric type. In 1945 it was listed as having 4000 seats in two levels, orchestra and balcony. It featured a fairly big stage, enough so to hold a symphony orchestra, and indeed was sometimes used as a music theater. Celibidache once directed the National Symphony Orchestra here, as an alternate theater to Bellas Artes, itself the home theater of said orchestra. The inevitable comparation with Grauman’s Chinese stands only as original inspiration goes, because both buildings are very different. The Palacio Chino has a big, traditional flat facade, right in front of Iturbide street. The many windows of this facade are adorned as small pagodas, and there is a big, ornate marquee. The vestibule was spacious and full of chinese decorations, even the ticket boots were rendered as pagodas.

The auditorium was of the atmospheric type, with pagodas, temples and gold Buddha statues amid gardens. The ceiling was vault-like, not flat but very arched, and of course was painted deep blue. The screen was protected by a heavy black curtain, with chinese motifs painted upon. The screen arch was very heavily decorated, with dragons appearing here and there.

The architect’s of the Palacio Chino were Luis De la Mora and Alfredo Olagaray.

It operated as a single screen cinema until it was sub-divided into 4 screens which opened on 11th October 1979.

I think my father owns or owned this marvelous building. He knew my mother; however, when she found out he had a family, she just walked away…In her memory, I just wanted to share her story, or the story I was told since I was a child.
alex 512-912-8923