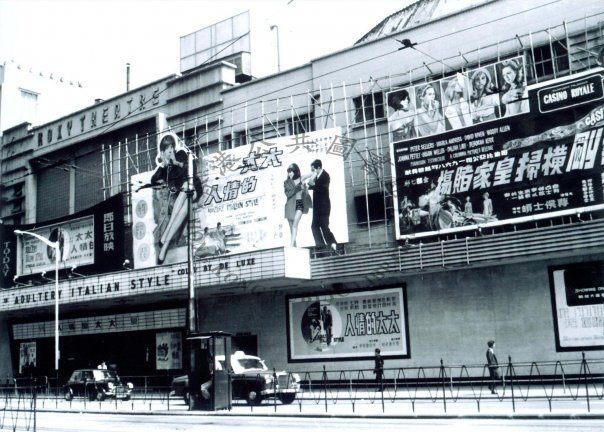 The Roxy Theatre was the first modern deluxe theatre to be built in Hong Kong after World War II. It was situated in the newly developed Causeway Bay neighbourhood of the Hong Kong Island. Since the plot of the theatre was irregular shaped, the entrances to the auditorium were on the right side while the exits opening to side streets were on the left and back sides.

The theatre opened on 30th March, 1949 and the first film was “That Lady in Ermine”.

The first Cinemascope film “The Robe” to be screened in Hong Kong was premiered at the theatre as well as the Broadway Theatre on the Kowloon side on 24th December, 1953.

In the late-1960’s and early-1970’s, the service and apparatus of the theatre was deteriorating rapidly, and on 1st February 1974, the Roxy Theatre closed its doors forever. The last film shown was a Mandarin-language kung-fu film.

The theatre was demolished in March 1974, and the vacant site was redeveloped as a high rise residential building.

The anniversary celebrations of the Republic of China were held at the theatre from 1956 to 1959.

The anniversary celebration of the Republic of China was held at the theatre in 1955.

It was amazing to see that picture supplied by ken mc. Casino Royale was to be shown there.