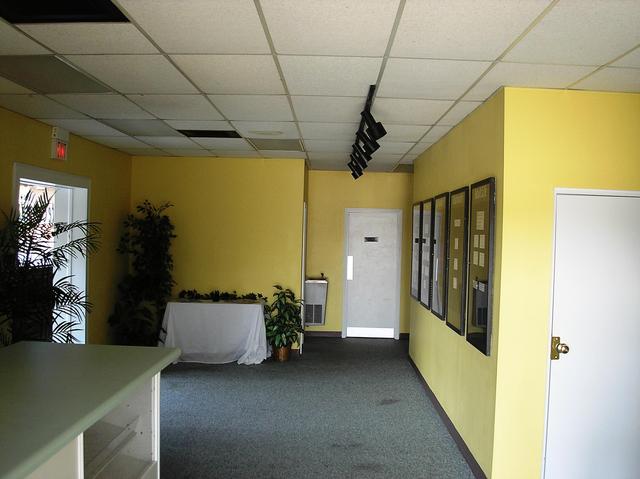 The Fayette Cinema opened in 1979. When I first came across this theatre in the 1980’s, it had sort of a really basic circa 1940-50-neighborhood theatre exterior with absolutely no distinctive details or ornamentation, just a stark light colour facade. The theatre was closed in 1986. It was twinned and later another auditorium built on. It was reopened in 1992 and closed in 1994. At last sighting had become a church.

Here are a couple of recent photos of the Fayetteville Theatre. The theatre was also known as the Fayette.

I moved to Fayetteville in 1987 and even then this was a discount house, despite being the only movie theatre in town at the time. I remember it primarily because they would have a weekly family matinee in the summer that would show older kid’s movies like Charlotte’s Web. While those shows were packed with parents grateful for something that would shut their kids up for two hours, the theatre did very little business otherwise and closed around 1990. No one bothered to take down the sign out front, so for quite some time it looked like they were open and still playing Total Recall. It was finally removed when the theatre reopened around 1994, at which point a friend’s mother remarked “Oh, that finally stopped showing Total Recall. That must have been a very popular movie!”. The theatre seemed to do decent business for a while, but finally died for good once the nearby Cinemark Movies 10 became a dollar theatre too. As is par for the course for older theatres here, it’s now a church.

As the description notes, there was very little distinctive about the place. However, it wasn’t totally without charm. The lobby was admittedly utilitarian and cramped, but the theatres themselves were absolutely cavernous. If I recall correctly, the screens were actually quite a bit larger than the ones at the two nearby multiplexes. The seats also rocked back and forth, which was a fun novelty. Not exactly a first class viewing experience, but for a poor teenage cinephile, it made for a decent Friday night.

There is so much wrong with this entry, that I had to sign up and offer some corrections. I saw untold numbers of movies here and then worked the concession stand when I was in high school. It was called Fayette Cinema. The theater was the anchor of a single story strip mall called Fayette Place on North Glynn Street — not Highway 92 as is listed here. The Google map is so wrong I don’t even know where to begin. In its early days, it was a first run house. I remember standing in a line down the parking lot to see The Amityville Horror in 1979. By the time I worked there in 86-87, it had become a three-plex and the owner was a conservative Christian who didn’t like to show R rated movies. I remember when The Witches of Eastwick opened, he refused to show it because of the witchcraft element. I have vivid memories of exploding butter machines, lots of roaches, half-cleaned theaters and, on several occasions, running the concession stand and ticket counter on my own during weeknights because the owner was too cheap to bring in extra staff. When he fired me for being a heathen, it was the happiest day of my life. Still, I saw some great movies there in the 70s-80s including a Gone With the Wind, Beverly Hills Cop, Fatal Attraction and Raising Arizona.