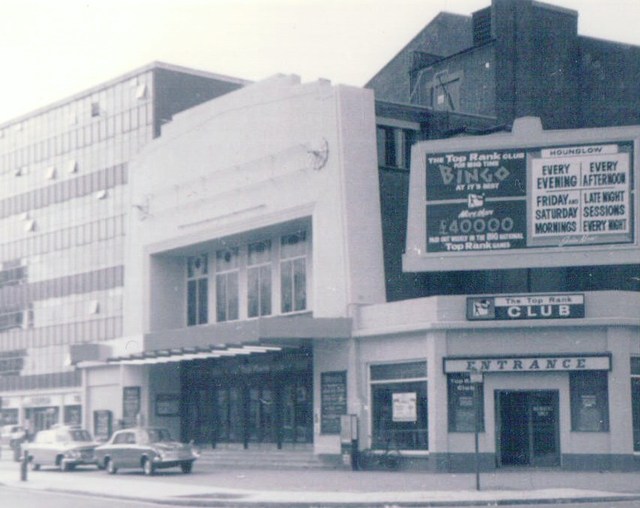 Located in Hounslow, Middlesex, in what is today a district to the west of Greater London. The Dominion Cinema opened on 28th December 1931. It was a huge cine-variety theatre built for the independent London and Southern Super Cinemas circuit.

Designed in an Art Deco style that architect Frank Ernest Bromige would soon become known for, the seating was in the stalls 1,460 and a rather small circle that was placed well back in the auditorium that seated 562. The auditorium had the appearance that it was wider than it was long with a proscenium opening of 49 feet. There were four dressing rooms and the cinema was equipped with a Wurlitzer 2Manual/6Ranks organ that had previously been installed in the Alhambra Cinema, Berlin, Germany. There was also a cafe provided for the cinema patrons and local shoppers.

The Dominion Cinema was taken over by Oscar Deutsch’s Odeon Theatres Ltd. chain in July 1937 but was never re-named Odeon. In fact it play mainly the Gaumont release due to the nearby Odeon (former Ambassador Cinema) already playing the Odeon release in Hounslow.

The final films shown at the Dominion Cinema were The Three Stooges and Carol Heiss in “Snow White and the Three Clowns” plus Laurel and Hardy in “Dancing Masters”, closing on 30th December 1961.

It was converted into a Top Rank Bingo Club from March 1962 and remained in this use for the following 45 years. It closed as a Mecca Bingo Club on 27th February, 2007, after which the building was immediately demolished.

The site lay empty for over a year before low-cost housing was eventually constructed.

Well, the Dominion has become one of Mecca’s latest casualties, with all its signage removed. Surprisingly, as of 6th March, it still hasn’t been boarded up ready for demolition, so I’ll post some more up to date pictures of it when I get the chance.

The demolition appears to have started, although, if I didn’t know better, I’d assume the building was being converted rather than demolished! Yesterday, the side walls were still standing, and the roof was still on, although all the east/west facing walls have been removed, and you can see daylight over the top of the metal cladding ie you can see right through one side of the building and out the other.

The link above seems to have become corrupted, so here’s a new one.

And another! Please try:

It’s the biggest pile of rubble I’ve seen in such a small area – towering about 30 feet high- very sad.

I flew over the site into Heathrow last week and the whole area is completly flat. Shame on you Mecca.

The site is still totally devoid of any activity, although ‘rubble mountain’ has gone, so there seems to have been no purpose whatsoever in demolishing the building so quickly

The link in the first comment I posted on Oct 12, 2005 is no longer working. Here is a new link to the auditorium photograph as a bingo club:
http://mawgrim.co.uk/bingo/hounslow.jpg
More vintage photographs of the Dominion Cinema:
http://www.ukwurlitzer.co.cc/1939.html

This is what the site looks like as of December 2010.