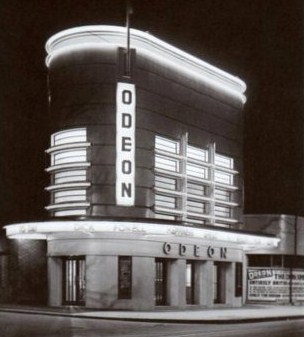 The Odeon Theatre opened on 20th March 1935 with Will Hay starring in “Dandy Dick”. It was the third Odeon Theatre that architect George Coles had designed for Oscar Deutsch and his blossoming Odeon Theatres circuit.

The Streamlined curved entrance block was Germanic in style and it look particulary striking at night when the original bands of neon tube lighting was switched on. The interior was adequate in a rather plain art deco style.

It was one of the early casualties if dwindling audiences due to TV and it closed on 5th January 1957 with Bob Hope in “That Certain Feeling” and Buster Crabbe in “Gun Brothers”.

The theatre was converted into a film studio with the auditorium basically stripped out of decoration. Known as Isleworth Studios, it concentraterd mainly on making advertisment films. By sheer luck, the name ‘Odeon’ could still be seen on the flank wall of the auditorium block for over 35 years since it ceased being a cinema, but it was removed around 1993.

The film studio moved out the building in 2001 and the auditorium block was demolished in May 2002. The front entrance block was retained, renovated and incorporated for an entrance into a new block of flats that was built on the site in 2003.

As a teenager I made an advert at the Studios, even then I was intrested in old cinemas but remember there was very little evidence of it having been one apart from the exterior as stated. My memory recalls there were two studios one at the front and one at the rear both roughthly the original height of the auditorium with dressing rooms built along the left handside. There was (at least as I recall it) no evidence of the circle which may have been removed. Later on I worked for a company belonging to the original owner of the studios and was told that at one time half the building was a TV property hire company and he developed the studios from this.

Here is another picture, taken in 2006, showing the whole of the modern development.
View link

This is the correct link to the 2006 picture of the whole development.

A vintage photograph of the Odeon Isleworth, taken shortly after opening in early 1935:
http://www.flickr.com/photos/kencta/148782161/

Here’s a great link to TWELVE 1930’s original beauties of this beauty !

Here’s a modern pic, showing all that’s left of the original

and here’s some more !

My previous link has become corrupted. THIS is what the Odeon looks like in 2009.

A friend of mine Roy Moore bought the premises and turned it into a prop hire company for T.V and film. He then built a studio inside to make adverts and even some films. The interiors of The Italian job were filmed here. I took Roy to the cinema ten years ago when it was a Chinese restaurant. He told me so many stories as we were given a conducted tour that I asked him to write his memories of the Odeon and his company which eventually became Superhire. He sent me 12 pages just a few days later and they are now in the Gunnersbury Museum. Les McCallum