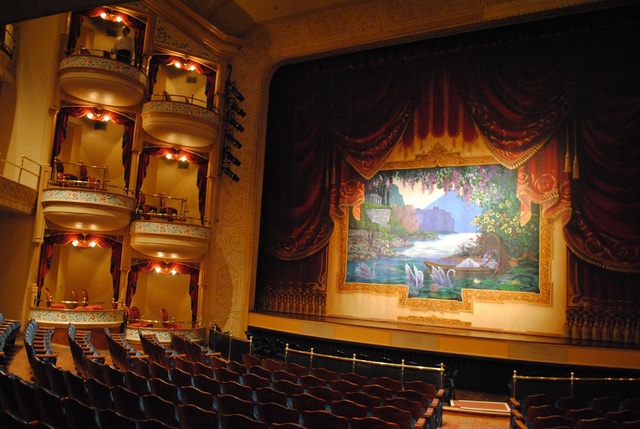 The Grand Opera House was opened in 1895, a neo-Romanesque style theater on Postoffice Street. It was designed by Frank Cox. The opera house building also included a hotel and retail stores. The 1900 hurricane which devastated Galveston caused a great deal of damage to the Grand, but it was rebuilt in 1901. By 1903, movies had begun to be shown along with live theater, vaudeville, and minstrel shows.

Upon its purchase by the Galveston County Cultural Arts Council in 1974, the twelve year-long restoration of the Grand Opera House began, which returned the building back to its turn of the 20th century appearance. The theater is owned and operated today by the non-for-profit 1894, Inc. It hosts stage shows, concerts, and other live entertainment.

The Texas State Legislature proclaimed the Grand the “Official Opera House of Texas” in 1993.

The Grand Opera House in Galveston is listed in the 1897-98 edition of the Julius Cahn Theatrical Guide, an annual for roadshow producers. The seating capacity is given as 1,677; ticket prices range from 25 cents to $1.50. The house was under the management of Greenwall Theatrical Circuit Company. The proscenium opening was 38 feet wide X 39 feet high; the stage was 42 feet deep. The house was on the ground floor and had both gas and electric illumination. There were 2 local newspapers and 3 hotels. The 1897 population of Galveston was 50,000.

Does anyone know how this theater was affected by the recent hurricane which roared thru Galveston?

The lobby was flooded, and the orchestra pit received some water damage — but overall they fared much better than many other nearby places. The theater will be repaired and reopened.

The architect for the restoration of the Grand Opera House was Killis Almond, of Killis Almond & Associates, a San Antonio, Texas, based firm specializing in the restoration of historic buildings. Click on their “Projects” link to find a link to a page about this theater, as well as links to pages about some of their other theater projects.