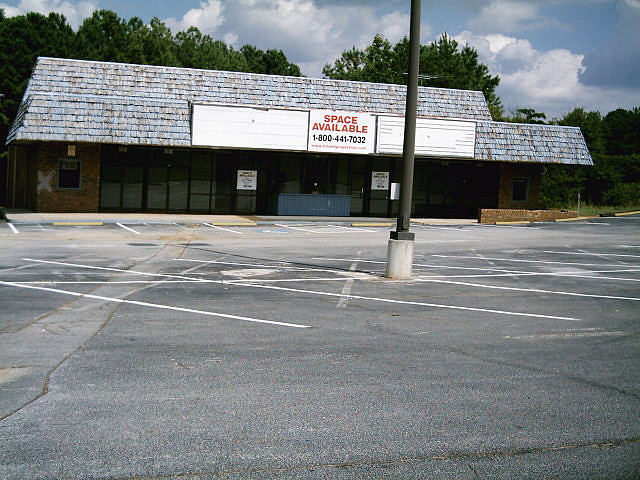 Don’t know much about the history of the theatre. Seems very similar in design to the Stonemont Theatre. At last check it was a dollar theatre in the late-1990’s and independently owned. It is currently home to a church.

Was operated by Septum for a time, not sure if it survived until the Cineplex Odeon buyout. Was later operated by Cinestar, a small independent.

A monolith of film entertaiment for semi-rural Conyers, GA in the late 70’s to early 80’s. A bit schizo in programming, first-run, second-run, and some fillers. Very similar to Stonemont except smaller and mono, never had any kind of stereo as far as I can remember. We moved out to Conyers from Decatur in ‘78. It was very mediocre compared to the more urban yet weirdly more sophisticated programming at South Dekalb. A church now I believe.

wasn’t too far from the Moonlite Drive-in?

I think that this location was built about 1970. I first recall seeing it from I-20 on my way to college in Milledgeville in 1972. It must have had some sort of independent ownership. It would occasionally place ads in the Atlanta paper, but always stand alone or CAP. Never part of a a chain. Around 1982 it was purchased by Georgia Theatre Company. I remember the time because I was working at South DeKalb at the time and they peeled off several of my good employees who lived in Conyers and sent them here.

A couple of years later it was acquired by the Septum chain. I thought this odd since Septum was in the process of building the Conyers 8. The story I heard from the GTC office was they wanted to get rid of Salem Gate and tried to sell it to Septum but were turned down. GTC then informed Septum that if they did not want it then they were going to double it to a quad and compete for all first run product. Septum bought it and soon closed it down, but I think that it was re-opened at least once under independent ownership.

There is an Evan Busman whose father Bob owned the Septum chain who comments on this site occasionally on Septum Theatre pages. Maybe he can ad some more detail.

That’s really interesting news about Salem Gate competing with the Conyers Cinema 8 down the street. I posted under “dmorg” years ago and grew up going to Salem Gate. I have to say, if GTC thought they could quad Salem Gate, those auditoriums would have been TINY. No way. Salem Gate ain’t no South Dekalb. Haha. Thanks for the update.

That story may be exaggerated somewhat, but it is what I was told. Actually, it makes some sense. GTC never met a theatre that it considered too small to build or twin. The final incarnation of the Lenox Square Theatre, their pride and joy, had two theatres in what had once been the lobby of the original #1 house. They seated 110 and 118 respectively and had such tiny screens that the sides of the scope picture and the top and bottom of the flats were cut off.

GTC had an odd habit of buying up theatres that they really had no use for just to keep the competition from getting them. In the 10 years or so that I worked for them this happened four times. The theatres were the Loew’s Parkaire, the Garden Hills, the Georgia Cinerama (Georgia Twin on this site) and this one. In each case there was a successful GTC nearby that they wanted to protect, in this case, South DeKalb.

While they were willing to buy and operate them that did not mean that they were willing to compete with their own locations or operate them at a loss. I had forgotten until I looked up its page that the Septum started out as a four, but when word got out that it was on the way, that is when GTC started to look to get out. Having Conyers to yourself (except for the Moonlit) was one thing, but they were not interested in trying to operate Salem Gate against a brand new quad.

I doubt that GTC would ever have put in the type of money involved to quad the Salem, but it made for a good story. And, since Septum ended up buying it, maybe it is true. Now, maybe someone can tell me why GTC never bought the Candler Twin.

I remember Septum taking over the theatre but I thought it was from an independent. Septum had a four plex which was being turned into an 8 plex. Salem Gate was a problem because they kept getting film, and occassionally some big pictures. So when the opportunity to take it over became available, Septum did so with the intent to close it when the 8 fully opened. It was an older theatre, had not been maintained well, and was in an undesirable location.

Stan and Evan, thanks for the valuable info. Always interesting. Salem Gate had a great run though (like the Stonemont I imagine) in that it could play exclusive runs as South Dekalb and Newton Cinema were the only theatres even close to proximity. I think Moonlit would play third run? Anwyay, that changed of course with the original Conyers Cinema 4 (later 8). I remember when GTC took over, Salem Gate would still get Return of the Jedi and Beverly Hills Cop. That was not to last long though as you mentioned.