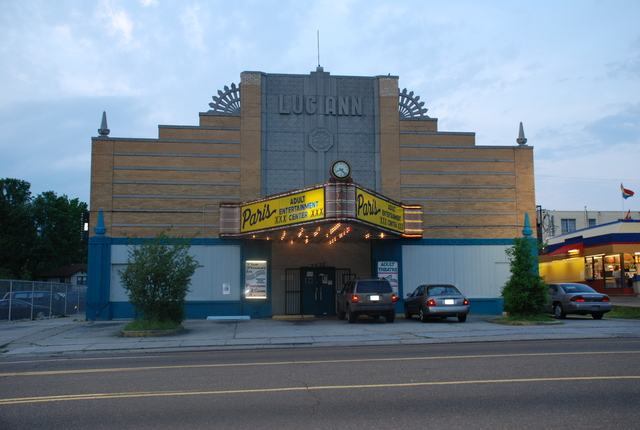 Prior to the Luciann Theatre being built, in 1936 a Parkview Theatre was planned for the adjacent site, designed by architect R.B. Spencer for the Parkview Amusement Co., but it was never built. The site became the parking lot for the Luciann Theatre. In later years a bank was built on that site.

In the early-1970’s it was sold to the Paris Adult Group, and for a number of years the concrete ‘Luciann’ name was covered by plywood. About one quarter of the auditorium was being used for adult films in 2011, with a few of the ‘venetian blind’ side lights still intact together with some architectural details. Therefore, technically, there is still one screen operating under the Paris Adult Group management. It was closed in November 2017. In the summer of 2020 the building was sold and work began to repurposed and renovate the theatre. It will revert back to its original Luciann Theatre name.

The exterior is amazingly well preserved as opposed to many other former neighborhood theatres in Memphis. Another Cianciolo operation, the Rosemary Theatre, was named for the third daughter, Rosemary. It did not survive in the 1960’s.

Looks like several of us have been by there in 2006. Here’s a shot from October 18, 2006: Former Luciann Theatre in Memphis, Tennessee.

I am the son of Augustine Cianciolo,he did not build the theatre my Grand father Michael Cianciolo built in in 1939-40,My dad ran it.The Luciann is named after my aunt Lucy Cianciolo and my aunt Ann Cianciolo Angelo.In the early 1960’s dan turnned it into a bowling alley ,not very suscessful so in about 1966 he turned it into a night club,Very popular with the Memphis Sound artests and very popular with the public.I believe that The Luciann had the first lighted dance floor in the city.In the early 70’s the neigaborhood changed and so did the busness so it was sold to the Paris Adult Group,we asked if the concret letters could be removed they said no.I have fond memories of that movie house when I was a kid dad would have my birthday party’s there we would have 4 hour showings of Tarzan movies and Flash Gordon movies.But alas the days are gone.There is something that my dad told me once he said that there was a time capusel in the east cornerstone of the building he did not say what was there but knowing my dad is is something special.Thanks Michael Augustine Cianciolo 3390 Central Ave Memphis Tn.38111

The June 2, 1958, issue of Boxoffice reported that Augustino Cianciolo had announced that the Luciann Theatre would be closed within the next 60 days and converted into a 16-lane bowling alley. Cianciolo also opened a new 20-lane bowling alley near his Plaza Theatre the same year.

The building should be heritage listed!!

There is community interest from several avenues in preserving it.

Great old theatre. I remember being a guest of the family there.

We have someone interested in accquiring the building. Would appreciate any info available!

Dear Spin doctor. Our family has not owned that property since about 1980. I would suggest a check of tax records for Memphis might help. I can tell you about the history up to the time the Luciann was closed when it was the Party Nightclub Mike Cianciolo