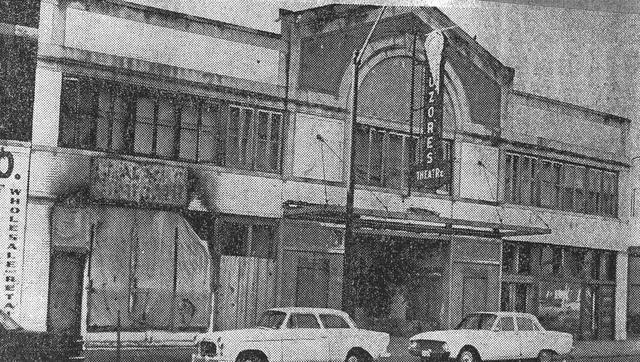 In 1932, it was bought by Fred Suzore and reopened as Suzore’s # 2 Theatre (his # 1 theatre being on Jackson Avenue). It was located next to a fire station on N. Main Street and a fire alarm was installed in the theatre in case firemen on a break happened to be inside the theatre. The theatre was also involved in litigation after a shooting incident involving Fred Suzore and an alleged poacher on his farm property in 1952. Elvis Presley is said to have been fetched from the Suzore # 2 Theatre for his first interview, the night “That’s All Right Mama” first played on the radio.

The building was demolished in 1967, and the Cook Convention Center stands on the site.

Jack; It is unusual for two different buildings to have the same name and numeric suffixes. Here in the UK I can recall a similar situation with a couple of cinemas in Islington, in North London. The Blue Hall Cinema and the Blue Hall Annexe Cinema. Both were operated by the same company but were totally different buildings located a few streets apart from each other.

I will notify the powers that be and get the status of the Suzore Theater No. 2 amended to Closed/Demolished

Re: Elvis' boyhood favorite (see comments for the other Suzore theater).
Careful study of the maps indicates that this theater was only a few blocks from the Lauderdale Courts projects where Elvis lived in the late 1940s/early 50s. The Suzore No. 1 on Jackson Avenue is farther away, although still within walking distance. This supports the idea that it was the Suzore No. 2 on North Main St. that Elvis attended as a child, and where he saw the early Tony Curtis movies that formed the basis of his later image as suggested by Albert Goldman in his Elvis biography.

This building is also gone. I checked with some old theatre-savy friends in Memphis who said this building had been torn down by the late 1960’s.

I suspect (but have no proof) that the Suzore #2 must have been an older theatre that was renamed. It would have been very odd for a small time operator like Mr. Suzore to have been able to afford to build a new theatre on North Main. Neither can I imagine it would be profitable as North Main had not been a fashonable address since the very early 1900’s.

We’ll have to research this one further.

Thank you for the offer Chuck, but I have quite a caseload and am posting new entries and updates as I have time and the information available. Please enter what you have directly onto Cinema Treasures.

Will, as you requested, in the Princess theatre section, I’ll add a little more information about the Suzzore theatre on north main street, in Memphis, as I knew it from the early 1950’s. As a teenager, in north Memphis, at that time, the Suzzore (#2), was the gathering place, for the neighborhood, on the weekends. Most of us teenagers attended Humes High School, on Jackson, AV, nearer to the Suzzores #1, but we didn’t care for that one, preferring instead #2. Across the alley, adjacent to the theatre was a fire station, and firemen, on duty, usually kept the alleyway fire escape door cracked open – and one or more would stand just inside the door – and watch movies, while keeping an ear out for alarms within the station. Sometimes, when they were gone, perhaps on a fire run, some of us would use that as an opportunity to sneak into the theatre, through the fire door. Just across the street, directly across from the fire station, was a neighborhood record shop,(name not remembered), that was as popular as the theatre. As someone mentioned earlier, these businesses were near to Lauderdale Courts, where many of us lived, and where, Elvis and his family lived. Elvis was just getting started in 1954, and would often come by the record shop and visit and play/sing for his friends. He also frequented the Suzzores. The Suzzores had a balcony, with a separate outside front entry, that was popular for some of the guys and gals to ‘watch’ movies from – though not much watching was done. Late 1954 or early 1955, Mr Suzzores closed the balcony to white patrons, and opened it to blacks. Previously blacks had not been allowed access to the theatre. In those days, blacks pretty much used the Beale street area, in south Memphis, for their downtown shopping, and they had one or more movie theatres in that district. Mainstreet theatres were not integrated. When he began allowing blacks into the balcony, from the separate front street entrance, it created problems. Whites, below, would get upset at the blacks for throwing things, such as candy wrappers, and such, down over the edge into the lower section below. Often times theatre management would have to intercede to quieten verbal confrontations having developed over things like that. Unsubstantiated rumor, was that Mr Suzzores had been involved in a vehicle accident involving one or more blacks, and had been sued, somehow resulting in blacks gaining interest in the #2 Suzzores theatre. It’s all gone now, the theatre, the fire department, the record store – the neighborhood, as we knew it. Even Lauderdale Courts were closed, for some years, and were nearly demolished – saved just within the last few years – by being revamped and turned into a gated community of low income condo type homes. I left Memphis in the summer of 1955 – and upon return (visiting) in year 2000, found little of the downtown Memphis that I remembered from the 1950’s. I missed seeing the mom and pop restaurants, the little Jewish clothing stores, the little neighborhood grocery stores, the corner drug store…….in their places are large government type buildings and complexes….sterile and cold. Main street is closed to vehicle traffic, and for the tourists, they have re-layed old trolley rails, from early last century, and have a bunch of trolly cars running up and down Main Street. Kind of sad.

Here is a photo of the intersection:
http://tinyurl.com/ypoj9q

Found a photo of what I believe to be THIS Suzore in the book “The Wurlitzer Pipe Organ, an Illustrated History” by David Junchen and Jeff Weiler on page 150. It is a reproduction of a 1927 Wurlitzer advertisement showing several small theatres equipped with Wurlitzer “Organettes” or photoplayers. The Suzore (spelled differently in the photo and the text) and The Peabody Theatre (q.v.)in Memphis are both shown having these little instruments.

The photo shows the Suzore on a corner lot, a 2 story front of brick with light colored stone (?) accents around windows. The marquee is a canopy without sign boards. It’s handsome and simple.

This does date the theatre to the silent era rather than the 1930s as stated above.

One of the Suzore brothers, first name unknown, and I became friends in 1952. He was the projectionist at the Rosemary theatre in Memphis and taught me how to run a 35mm arc lamp projector. This was before ‘platters,’ so I learned how to operate the two projector setup as well as the rewind machine, splicing, and tagging. I’m sure he and his brother had already sold their two theatres.

I finally have seen, but could not copy, a beautiful, clear photo of the Lincoln Theatre at 297 N. Main. It is this theatre. An interesting banner over the entrance reads “7pm White Entry.” Proof of this is an “L” visible in the keystone of the arched window behind the vertical sign—which was repainted when Fred Suzore purchased the building and reopened it in 1932. This “L” is visible in the photos posted for this theatre. It was opened in 1927, the same year the Suzore on Jackson opened. It is curious. I have now seen newspaper ads reading “Suzore Theatres” and “Suzore’s #1 and #2.” Both signs must have been repainted at the same time to read “Suzore’s” but the floor tile of the Jackson theatre reads “Suzore Theatre” to this day. Of course, Fred Suzore was somewhat eccentric. Also the vertical on Jackson appears to have a marquee.

As mentioned above, Elvis Presley supposedly was at this theater the night Dewey Phillips played That’s All Right Mama on the radio. I’m not sure what the exact date of that is, but if indeed Elvis was at the Suzore #2 on North Main, then here is a list of what was showing there around the time: Monday, July 5, 1954: Carnival Story and Siege At Red River. Tuesday, July 6, and Wednesday, July 7: Best Years Of Our Lives. Thursday, July 8 and Friday, July, 9: Kansas City Confidential and War Paint. Saturday, July 10: Great Diamond Robbery and Goldtown Ghost Raiders. Sunday, July 11, and Monday, July 12: Stranger Wore A Gun and Miami Story. Tuesday, July 13, and Wednesday, July 14: Sasketchewan.