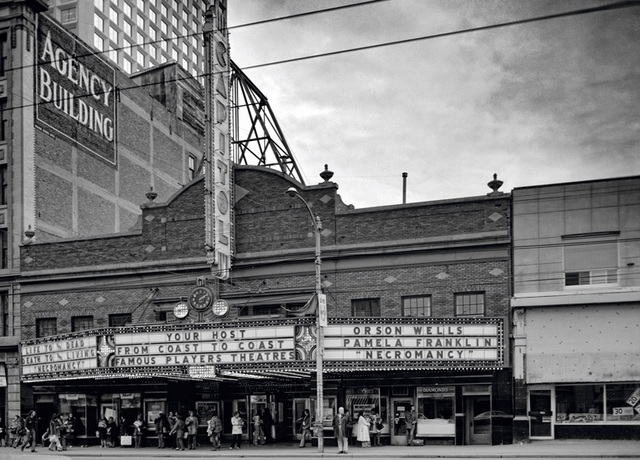 Opened as the Allen Theatre on December 2, 1918. On October 29, 1923 this house had been acquired by Famous Players and was renamed the Capitol Theatre. Following a major remodeling in 1938, the theatre boasted that its new marquee, with 2,000 lights, was Canada’s largest. From 1952 to 1957, the Capitol Theatre also served as the first home of the Edmonton Symphony Orchestra.

With the declining popularity of big downtown theatres, the Capitol Theatre was closed on November 5, 1972 with Ron O'Neal in “Superfly”. It was demolished, along with several adjacent buildings, to make way for the mixed use Capitol Square project, which included a four screen multiplex cinema. This multiplex, too, has now been closed.

When my dad told that cost 10 cent a movie in 40’s and 50’s at old Capitol Theatre. It was demolished theatre in 1972, to build new Capitol Square building and it open it late 1975 with mulitplex cinemas, I use to see movies many time at Capitol Square cinemas and it was busiest theatre in first run movies. This is my favorite theatre, good sound, comforoable seating ang screens are large.
Famous Players sold to Cineplex Odeon due financial difficult in 1995 and Cineplex closed it for good due financilal difficult too in 1998. It was sad to see theatre closed and it switch to Epcor Centre office space in 2000.

Last day at the Capitol 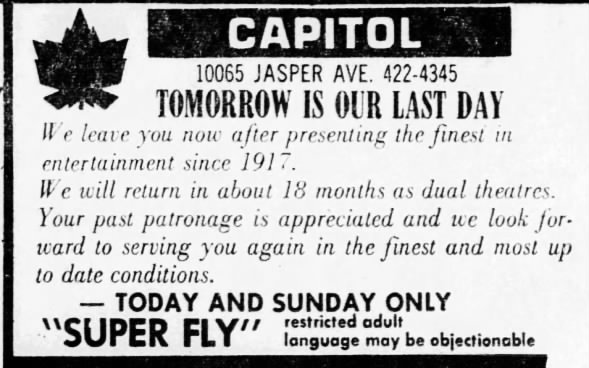