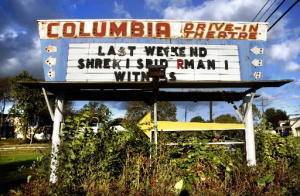 The owner was J. and C. Mellor and the drive-in was open March to October and had FM and AM sound. It had double features and intermission trailers. It had new owners in 2001. It was opened on August 9, 1956.

Here it is 2011 and nothing has been done. The drive in could have remained open, at least that would have been better than the weeds.
The drive in was supposed to be replaced with a housing development and probably another blooming shopping center. During one of the Columbia Drive In operating periods it showed only adult films. I cannot remember whether it was over 18 or over 21. During that time the state built the Route 30 bypass behind the theatre. Cars used to park on the shoulder of the bypass to watch the movie. (Who needs sound for an adult film.) The state wanted the drive in owner to install a wall to block the view of the screen from the bypass.

The state also put up no parking signs along that portion of the
road. During the time of the adult presentations I believe the
same person owned the State Theatre in Columbia and that was used
for adult films as well. Just a little bit of trivia.

Thanks Chuck,should have known there was more to the story,just came across it about why he left, and i wondered what had happen to Lost.

Yes, Lost Memory is very much missed as he was one of the best CT members and I do feel his reasons for leaving were well warranted though I wish he had decided to remain a member with his wonderful contributions. Having written this about Lost Memory I don’t intend to write about it here again as these comments should be left to personal email and not taking up space on the subject of this drive-in.

I realize there hasn’t been an update about this DI in a while, but I’m confused. According to CT, this DI has been demolished, but the property is still for sale and the buildings still standing according to this website: http://www.showcase.com/property/4061-Columbia-Avenue/Columbia/Pennsylvania/681571 I don’t quite live close enough to Columbia to justify driving out to see for myself. Does anyone know it’s current state?

Nothing exists of this drive-in. If you didn’t know where it was you would never know it had been there. Street-side marquee, screen, concession and projection building were all demolished years ago. The entrance and exit roads are mostly grown over, and the land is a grass-covered expanse that an adjacent dairy farmer uses for grazing. The land is for sale, however. The sign went up fairly recently. Apparently the landowner’s plan to building a shopping center there didn’t pan out, so ultimately this little gem was demolished for nothing. That’s really a shame, because the last owners of the drive-in did a great job of renovating and running it, and it was packed every night. Reportedly they had the opportunity to buy the land but had come off a rainy season and were short on cash and had to take a pass.

Google Street view from July of 2016 still shows nothing has been done with this site.

Closed with “Shrek”, “Spiderman” and “Witness”.