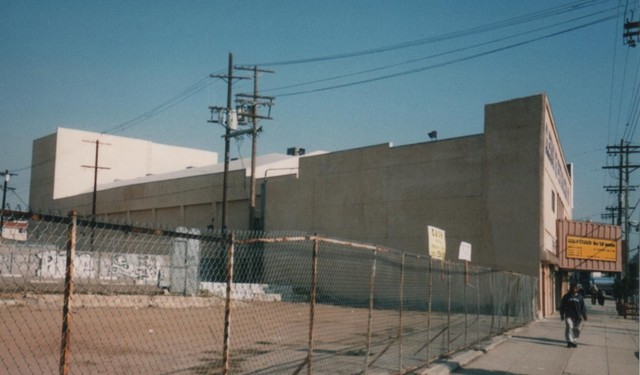 Bard’s Adams Street Theatre was opened August 4, 1926 with the world premiere of “Shipwrecked”. It was operated by the L. Lou Bard chain Far West Theatres Inc. In the early-1930’s it became part of Fox West Coast Theatres chain. Today, the former Fox Adams Theatre is home to a church.

from what i can gather aretha franklin once owned the theatre,it was managed by her brother and she mentions it in her book.as for the remodel change,it wasnt a “plane jane” up until maybe 8 to 10 yrs ago.

The Kabuki Theatre was advertised in the LA Times in April 1964:
http://tinyurl.com/23zzge

This is from Boxoffice magazine, August 1962:

LOS ANGELES-Allied Theaters, operated by Bob Helm, Phillip Hoffman and Sam Decker, has taken a 20 year lease on the Bard Theater, 1,200-seat neighborhood house, which they have renamed the Adams West and switched to a first-run policy. The Bard had been closed for the past five years.

The Adams West switched from showing movies to live shows in late 1963. Around spring of 1964, it was renamed the Kabuki and started showing Japanese movies until 1973. It went back to showing American movies for a short time and closed for good.I grew up in that neighborhood.I was last in the theatre to see a couple of exploitation movies, before it closed. The theatre was in desperate need of remodeling.

My father was manger of the Bards from around 1951 till the early 60’s. We moved there when I was 7 and lived over the house in apts.It was fun living there as I rode my bike up and down the aisles.Seating around 1100 it took a while to get up and down. There was a pit at one time and also chandeleirs which needed to be removed to show more modern films. Dressing rooms were below but always cold and damp. The house was huge and beautiful and sometimes scary when I was young. We had many live shows, including Ice Capades, Roy Rogers, and the Three Stooges. Saturdays were always full of serials and horror movies were a lot of fun. In latter years memories were mixed as I had my first experiences with race issues. As the area was in a white flight. But it gave me a better understanding of feelings on both sides. I never had any problems and the kids on Saturdays never seemed to mind what color they were. They just came to have fun. Movies seemed so much bigger then and so were the trips to Hollywood for opening night. We cooked our own popcorn in those days and I worked there for many years.

Bards was a favorite when we would venture to the “Westside” when I was a teenager. Coming west up Adams Blvd, as you came over and down the hill toward crenshaw Blvd., there was huge metal side that proclaimed “Bards” in flashing lights.

Opened in 1925 by Lou Bard as Bard’s West Adams. In the 1929 city directory it was called Bard’s Adams Street. The location is just west of Crenshaw Blvd. Bard operated a number of other theaters including the Olympic downtown on 8th off Broadway, and two Hill Street theaters nearby, the Town Theatre and the College Theatre. Bard’s also built the Vista Theatre on Sunset Dr. in the Los Feliz area, and Bard’s Egyptian Theatre in Pasadena.

In the early 30s after the theatre became part of the Fox West Coast circuit it was called the Fox Adams. Evidently Fox didn’t keep the theatre long — it was called Bard’s Theatre by 1936 if not earlier. In 1945 it was an independent advertising as Bards Theatre once again.

An August 1962 item in Boxoffice noted that “Allied Theaters, operated by Bob Helm, Phillip Hoffman and Sam Decker, has taken a 20 year lease on the Bard Theater, 1,200-seat neighborhood house, which they have renamed the Adams West and switched to a first-run policy. The Bard had been closed for the past five years.”

They did a few live shows in 1963, and Adams West became a music house where I saw Les McCann Ltd perform here and recorded an album of the show. By 1964 it was a Japanese language house, the Kabuki Theatre.

1973 brought Hollywood films back to the theatre but it soon closed for good as a film house. As a later black cabaret venue in the early 80s it was the Apollo West.

Now a church, the current group, Restauracion, has had the building since 2000.

Al Lyons, who was musical director at the Los Angeles Orpheum in the 1940s and who earlier had been an emcee for the stage shows at the Fox in St. Louis said in an interview published in St. Louis in 1931: “There was a small theater, the West Adams, which was so conservative that it didn’t even have music with its pictures. I induced the owner to permit me to rent a piano and become his sole orchestra—for $12 a week. Those were happy—and busy—days. Worked from noon until midnight, playing to the pictures. I rumbled the bass when thunder pealed. I pounded the sides of the piano to simulate the hoof beats of galloping horses. I played songs about moonlight and daisies and purling brooks. I was in truth, delivering all the sound effects the action on the screen demanded.

I suspect that Mr. Lyons was speaking of another theater, perhaps the Adams Theatre at 1898 W. Adams. Bard’s West Adams was a fairly large house, and Lou Bard always had organs installed in his theaters. This theater was even equipped with a stage house and presented vaudeville as well as movies in its early years, as did Bard’s two other big houses, the Colorado in Pasadena and the Garfield in Alhambra.