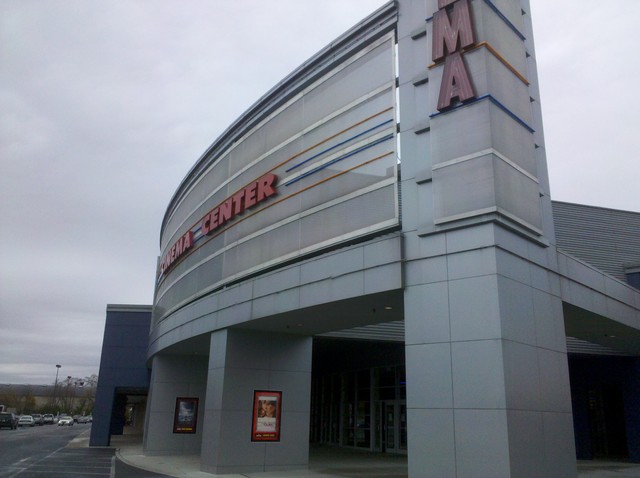 The Cinema Center was built into a building that previously was a department store. JKRoller Architects of Philadelphia designed the theatre. The roof was raised to accommodate the stadium seated 12-screen movie theatre. The new facade is clad with backlit aluminium panels accented with illuminated signage and neon. One auditorium has 460 seats and is the largest in the Harrisburg area.

Upon opening in June 17, 2005, the Cinema Center became the flagship of the Central Pennsylvania movie theatre chain that is also named Cinema Center. It was taken over by Carmike Cinemas in August 2014.

s the cinema supply company, and the Capital theatre in Bloomsburg
Pa.

Marv Troutman owns all of the cinema centers, plus the above
Norelco

In 2008, architectural firm JKRoller Architects, designers of the Cinema Center at Camp Hill, changed its name to JKR Partners.

I hope this does not violate any community guidelines, but this theater is the worst. I primarily go to “special event” presentations (Met Opera, Turner Classic Movies, The Ballet), usually shown in House #4 which has a terrific size screen with the right aspect for Scope presentations. Which only has merit if you get the show up there!

My first outing with these classic presentations was several years back with the 50th (?) Anniversary showing of “Lawrence of Arabia” and it was nothing short of spectacular, just like seeing it in 70mm at the Eric back in 1963.

Since then the quality of presentation has deteriorated to the point I simply am not shelling out $12.50 or $22 to have in the back of mind anticipating how they are going to screw it up this time!

It was bad when CarMike ran this place, and with AMC it has deteriorated ever further: house lights not going down until you run out and tell the candy girl; previews for the evening show coming up the middle of the opera; endings for the Ballet cut entirely, no sound for the crucial first five minutes of “Sunset Boulevard”, rock music playing over the opening of “Carmen”, just to vent a few of these incidents. And if house lights not going down are to be expected, in the case of “The Sound of Music”, they came back UP during the crucial cemetery scene with the Von Trapps hiding behind the tombstones, a dark scene already so you could barely see anything at the end.

“White Christmas” was the last of these misadventures for me, with the introductory comments and main title cut entirely, and when it did get on the screen, the picture was dark and flickered throughout. Had I not had my heart sent on seeing this holiday classic, I would have left.

When “Ben-Hur” had it’s 60th Anniversary showing a few weeks back, I went to the other side of Harrisburg to the Regal Stadium 14; first off, it’s a much more congenial atmosphere from the time you arrive; the screen is a smaller, but with the right aspect ratio for “Scope”, and bright, sharp projection. It’s a bit further to go, but certainly worth the trip.

To be fair, the “regular” movies that I have seen at the AMC never had these problems; it’s these special programs that do not get any management monitoring the show and hoping the automation programming was done right, which in too many cases for me it was not.

Makes me long for the days of the State and Eric and Trans-Lux when movies had curtains!