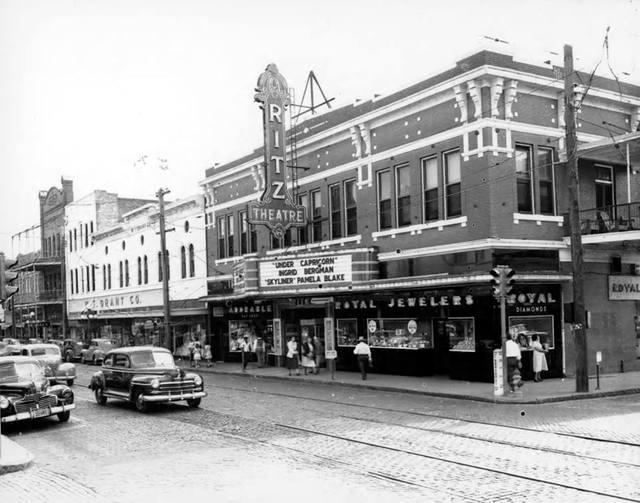 The Rivoli Theatre in Ybor City, Tampa, Florida was built in 1917. It was expanded in the 1930’s as the Ritz Theatre. By 1957 it was operated by the Talgar TTheatre Company chain. From January 1, 1966 it began operating as an adult movie theatre and closed in 1982.

It became The Masquerade concert venue and nightclub, but this eventually closed in early-2006. On June 26, 2008 it re-opened as the Ritz Theatre and is now used for concerts and special events.

Mike, Thanx for the plug & the thumbs up, I can use the extra publicity…LOL! Remember you also did a great job on the National Hills book! Andy, if you’re reading this and are interested in a copy I can send you one if you’d like. It’s just a booklet listing all the films I saw here along with some history of the theatre and several anecdotes that I recall from years ago. Just email me your address at and I’ll mail you a copy.

Nick. it was 100 times better than what I did on National Hills.heck, I stole your Idea.LOl.

Long-lost drawings of the Ritz Theatre by architect M. Leo Elliot were discovered a couple of years ago. Here is one of them.

Elliott labeled the drawing Haya Theater. According to this web page, the theater was built on the site of Ybor City’s first cigar factory, founded by Serafin Sanchez and Ignacio Haya in 1886. It’s possible that members of the Haya family were involved in the development of the Ritz Theatre.

Thanks Joe for the drawing and additional info. Evidently the Ritz was also known as the Rivoli at some point during the early days. I remember seeing a photo with the Rivoli sign on the building. The drawing is very intriging. It may have opened as the Haya and was later changed to Rivoli and finally Ritz. Or possibly Haya was never used. Probably the only way to determine for certain is checking the city directory to see what’s listed at that address around or about 1917. I’ll put this on my to do list.

Some Ritz memories from Saturday, October 3, 1964.

“A Hard Day’s Night” finally comes to the Ritz on a triple feature program along with “He Rides Tall” and “Summer Holiday.” The Beatle film is scheduled to run as the third feature. During the running of “He Rides Tall” theatre begins filling with hundreds of teens and pre-teens and a few adults. As I turned to look around the theatre I notice that just about every seat was filled. There were several people standing against the side walls as well as the rear of the auditorium. This was the first time I had seen the Ritz at full capacity…sold-out to the walls.

Not very many are interested in watching the first feature. The audience is noisy. Many kids are talking and laughing among themselves. Suddenly the feature goes off the screen, the house lights are turned up, and the manager walks onstage yelling, “quiet…quiet!” The noise finally subsides and he makes the following announcement, “several people have come to me saying they can’t hear the movie because of all the noise you people are making. I’m warning you…if you don’t quiet down and this noise continues I will shut the theatre down and give everyone a refund.” He walks off the stage, the house lights are turned off, and the film continues.

Aside from some mild whispering the audience is fairly quiet through the remainder of the film as well as the second feature, “Summer Holiday.” Near the end of the film the house lights are turned up again, the manager and assistant walk onstage and stand near the right side of the screen watching the audience. The film ends followed by several trailers. The United Artists logo for “A Hard Day’s Night” then appears onscreen. The opening scene showing the running Beatles incites screams from several girls which are suddenly cut short by the manager’s raised arms with hands outstretched as a warning. They ran the entire film with the house lights turned up and the manager onstage.

I believe management made a poor decision in running the Beatle film as the last feature. Had they run it first many kids would probably have left afterwards and those who were interested in the other two features would have been able to watch them in peace and quiet.

A few more RITZ memories. Here are several triple features that played on the weekends. Most attractions are horror/sci-fi.

November 4 1962: “Beast With A Million Eyes” “Bride And The Beast” “Beast Of Hollow Mountain”

November 25 1962: “Monster Of Piedras Blancas” “Monster On The Campus” “Monster That Challenged The World”

September 1 1963: “House Of The Damned” “Terror In The Haunted House” “Varan The Unbelievable”

September 28 1963: “Battle Beyond The Sun” “Brain From Planet Arous” “First Spaceship On Venus”

This was the final program I saw at the Ritz. On January 1 1966 theatre transitioned over to running triple-X adult fare.

Hello to the Ritz Theater. It has been about fifty years since I’ve been to the Ritz. My sister and I would walk in a side door around the corner of Seventh Avenue, in to the office door that was my father’s, who owned the Ritz with his mother, Katherine. We would go into the theater to see Swiss Family Robinson, Lady and the Tramp, etc., while he worked. After it was sold to a man named Leo or something like that, I think, is when the Burlesque shows began. Love the corner it sits on and the wonderful childhood memories I will always have to keep. Mary Jane Morgan Young

50 years ago today was the final day of operation for the Ritz as a standard movie house. On January 1st 1966 the theatre reopened as the Ritz Adult featuring triple-X films and live burlesque stage shows.

Ads started to appear for this theatre on September 25th, 1937 but it may have been opened before.