The Marquee Cinemas-Steamtown 8 was opened by United Artists in 1995. It closed December 30, 2014. It was taken over by Phoenix Big Cinemas and after renovations were carried out, it reopened in Fall of 2016 as Iron Horse Movie Bistro, operated by Phoenix Theatres Entertainment. It was closed suddenly in January 2018.

On March 5, 2019 it was reopened by Cosmic Cinemas whose policy is to cater for mature adults. Under 17 years of age must be accompanied by an adult and no babies are allowed into the theatre. Also there is a no talking ban and cell phones are prohibited. In November 2019 Cosmic Cinemas went broke. It was renamed Scranton Art Haus.

This theatre is being remodeled by Phoenix Big Cinemas into a luxury-style brew and view venue. Leather reclining seats and restaurant and beverage service will be available. It will be called the Iron Horse Movie Bistro, with an opening date scheduled for Fall 2016.

Was in Scranton today and drove by, didn’t see any activity at this site. Everything outside that identified it as previously a theatre has been removed.

Apparently reopening soon by Cosmic Cinemas out of South Carolina, there is an interview from the Scranton Fox affiliate at https://fox56.com/news/local/dont-call-it-a-comeback-iron-horse-bistro-is-set-to-return with a few shots of the interior, looks nice.

That policy stated above of not allowing anyone into the theatre under the age of 17 seems incorrect. Several of the movies listed on the website are family films and Fandango is selling children’s tickets for all the movies. Maybe unescorted minors under 17 at night?

Cosmic Cinemas' focus on adults stands apart from other movie theaters. Our beverage menu caters to a more sophisticated palate, and a parent or guardian must accompany children under 17-years old. Additionally, no babies, talking, or cell phones are permitted in the theaters. 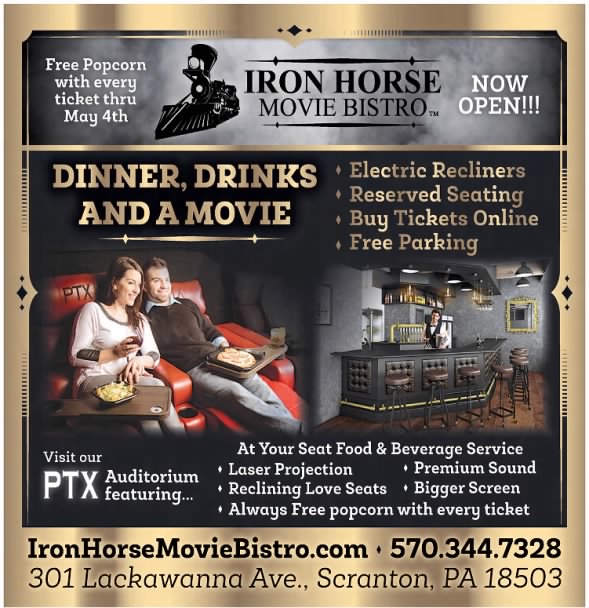 yet another grand opening ad posted in photos

The Cosmic Cinemas chain shut down earlier this month. This theatre has reopened as the Scranton Art Haus.