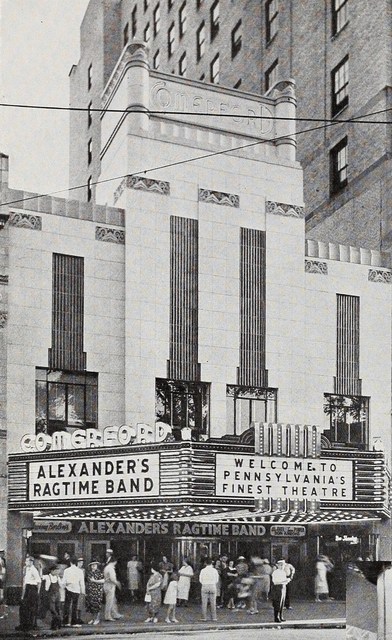 The Capitol Theatre was opened October 11, 1920 by the Comerford Theatres chain. Seating was provided for 1,884 in orchestra and balcony levels.

I lived in the W-B area for 19 years, and tho it was before my time I know something about the Capitol. It probably went back to the ‘teens. After 1949 it was the Comerford because an anti-trust suit led to the newer theater on the square being changed from that name to the Paramount (now the F.M. Kirby Center). After the disastrous l972 flood the Capitol/Comerford was divided into 3 houses: Barre Ease, Barre West & Barre Loge, but survived only until about 1977, closed and was demolished not long afterward.

A newer office building replaced this theater. The status should be changed to closed/demolished.

The Capitol was in operation by at least 1928, when a drawing was made of it by artist Anthony F. Dumas. If this house was owned by the Comerford circuit, then it might have been under construction in 1919, when the October 11 issue of the trade journal Domestic Engineering carried a brief item in its “New Construction Work” column reading: “$150,000 theatre, Wilkes-Barre, Pa.; M.E. Comerford Amusement Co.” I suspect that this project was indeed the theater that became the Capitol.

Here is a photo from the 1940s depicting the east side of Wilkes-Barre’s public square. The marquee of the Capitol Theatre can be seen at left. The Comerford Theatre can also be seen in this photo, at the end of the street.

Here is a later bird’s-eye view from a few years later, looking the opposite direction along the east side of the square, with the remodeled facade of the theater, by then renamed the Comerford (see Alan Bone’s comment above), at right.

I don’t think Anthony F. Dumas was the architect of this theater. He did a drawing of it, but that was quite some time after it was built. So far I’ve been unable to discover who the actual architect was.

The Theatre Historical Society has this page about Dumas' drawings, sixty of which are in the Society’s archives.

An article about Comerford Theatres in the August 31, 1921, issue of The Scranton Republican listed the Capitol Theatre in Wilkes-Barre as one of the houses that had been designed for the chain by Leon H. Lempert Jr. of Leon H. Lempert & Son.

The interior pictures have Lempert written all over them.