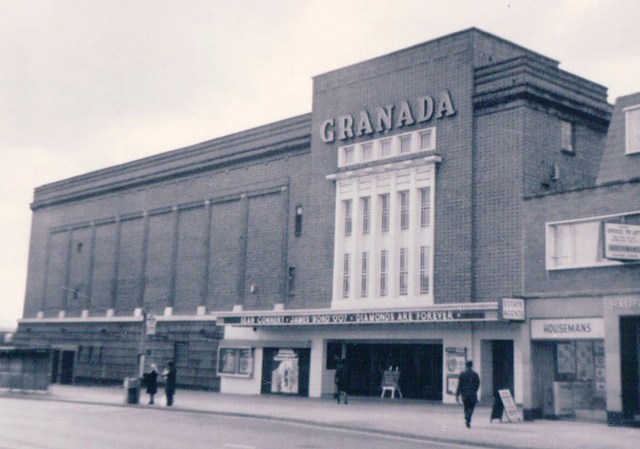 American architect C. Howard Crane designed this Granada Theatre (his second design for the circuit-after his Granada Greenwich opened a year earlier). The plans were revised by Cecil Masey and the interior decoration was by Theodore Komisarvjevsky. The auditorium ran parallel to the road and the only relief in the massive brick facade were the windows set in white stone over the entrance to the right.

The Granada Theatre Slough opened on 23rd March 1938 with Leslie Howard and Bette Davis in “It’s Love I’m After” with Leslie Howard making a personal appearance to declare the theatre open. The supporting film was Jack Benny and Ida Lupino in “Artists and Models”.

Seating in the auditorium was in stalls 1,070 and balcony 630. It had a large cafe/restaurant located above the outer entrance hall and a Wurlitzer 3Manual/8Rank theatre organ (with grand piano) which was opened by organist Dudley Beaven. A car park was provided for patrons. Due to the proximity of Pinewood Studios, many film stars came along to the Granada Theatre to promote their films and in 1939 & 1940 the Granada Theatre began a tradition of immortalising each visit by each star placing their hand and foot prints & signature in wet cement outside the theatre (a tradition which began at the world famous Grauman’s Chinese Theatre, Hollywood California). Here at Slough were the imprints of Leslie Banks, Valerie Hobson, Will Hay, William Moffatt, Robertson Hare, Moore Marriot, Sabu & Michael Redgrave.

In 1971 the cinema was equipped to screen 70mm films and two years later, from 15th June 1973 it was tripled with 624 seats in the former balcony and two screens in the former rear stalls seating 239 and 187. It was closed on 19th November 1987 and demolished in 1988. The signed concrete imprints were sent away for storage and appear to have been lost.

From recollection, the Granada closed within 1 week of the new multiplex (Maybox cinema – a very poor standard of conversion of the previous Fulcrum entertainment complex) opening in the town centre.