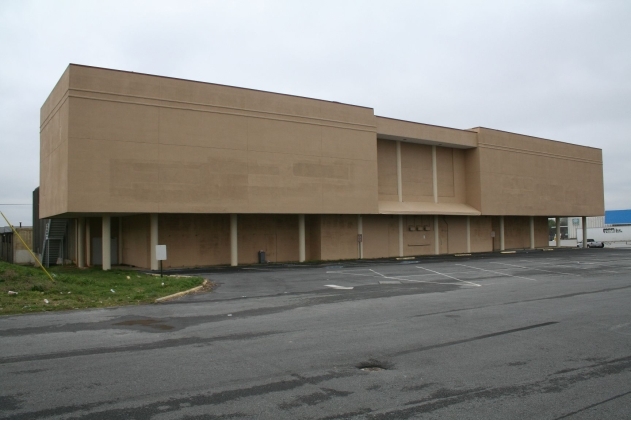 For what it lacked in design this theatre made up for in film presentation. Opened on October 22, 1971 as the Storey’s Old National Triple Theatre with Sean Connery in “The Anderson Tapes, Jane Fonda in "Klute” and Lawrence Pressman in “The Hellstrom Chronicle”. It was among the first multiplexes to be constructed in the metro Atlanta area. Each of the three very spacious auditoriums featured a large screen with state of the art projection and sound.

The National continued to expand its number of screens over the years by building on rather than splitting any of its auditoriums. It was closed by Regal in 1998. The theatre was still intact, albeit shuttered as of early-2005.

Here are a couple of photos of the Old National from the Stan Malone collection.

This location opened on 10/22/71. The attractions were “Anderson Tapes,” “Klute,” and “Hellstrom Chronicle.” I never saw a movie here, but I did know someone who worked during the expansion, and he said it was pure misery. As you can see from the picture, they added two auditoriums upstairs, over the lobby. The first thing they had to do was cut holes in the roof for the support columns and from then until the project was finished it was a constant battle to mop up the water that poured in every time it rained. I was under the impression that this ended up as a 7, and in addition to the two new upstairs theatres, they also split two of the existing theatres although there were only six marquees out front.

For its first six years the Old National ran intermediate break and occasional wide break first runs. After 1977 when almost all movies opened wide, it was mostly first run. The only real competition came from the Greenbriar, Westgate and Ben Hill which were in another zone several miles to the north.

I actually helped with the closing of this facility and then was responsible for it as a projection warehouse. It was very unique in design, but seemed to be anightmare from an operations standpoint. The projection stairs going to the third floor were VERY thin, to the point a film could not be moved there in clamps, but had to be broken down first. The element in the shoping center became extremely rough in 1997/1998 and there were several assaults and robberies in the parking lot, one right outside the front door where a customer was actually injured. The location was still profitting when it closed from what I was told, but it was too much of a liability and is now used as one of Regal’s warehouses. 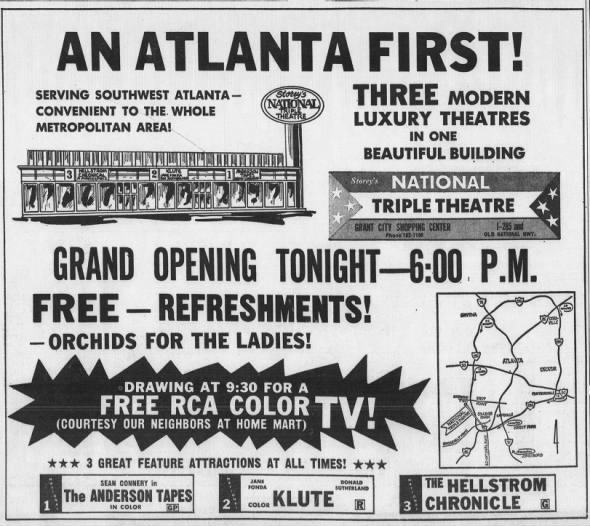 I was never in this theater as it was not my part of town, but I did know people who worked there. As I said in my previous comment it opened as a triple, something confirmed by Mike’s ad posting. My hazy memory is that the big house was twinned making it a four. Then two more were added upstairs making it a six. You can see the addition by comparing the picture in the opening day ad with the one at the top of the page. Later the original medium house was split making it 7. I was not aware that it was ever an 8, but at different times it was known as National Triple, National Four, National Six, and finally (at least to my knowledge) National 7.

Maybe mcone1 can clear this up since he worked there.

I never worked there but I went there many times to see a movie. Originally there were three screens. One large screen, one medium and a smaller auditorium between the other two.

Around 1980 a fourth auditorium was added to the left of auditorium 3. It was a little larger than the one beside it. It was here that during the 1980’s three-d Old National would show the 3-D movies. I do not think the screen in this auditorium was curved like the other three.

During the mid 1980’s two additional auditoriums were added above the lobby. This was the time that the theater looked terrible. It was like they took out the roof over the lobby and had tarps over it. I do not believe that the top two auditoriums had curved screens.

After this time, they split the large auditorium. I remember seeing the remake of The Blob here.

After this, I do not remember them having an eighth screen. I did see Terminator 2 at a 12:30 am opening day screening. The last movie I saw there was Bebe’s Kids.

It is sad to see what was once a good place to see a movie go to seed.