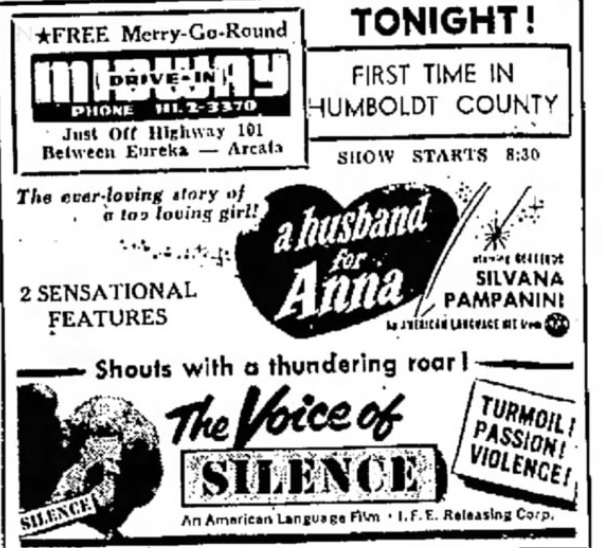 The Midway Drive-In was opened in 1951, with a capacity for 450 cars. It was owned by Mann Theatres and operated by Redwood Theatres Inc.

The Midway Drive-In was closed in September 1986.

Good luck trying to get old theatre employees to talk.this from a guy who just had nice theatre reunion back in the fall of 2009.Told old stories for hours.Then mentioned Cinema Treasures and how we could all talk about each of the theatres and here it is 2010 and not a single one has gotten on.It drives you crazy.Someone will take the time to meet at a nice steak house for a couple of hours of theatre talk and then not get on CT.I enjoy reading old theatre employees posts more than any other post on CT.Cause We lived it,not dreamed it.

Thanks for the photos SiliconSam.

MikeRogers……‘Cause we lived it, not dreamed it’ How right you are. Unfortunatly, I have learned that there some of us who actually get theatre exhibition in “the blood”, but others, the majority of course, who had nothing more than a job that really means nothing to them. It seems their lives go in different directions and never really share the same feelings others do. People who I thought shared my “theatre feelings” usually change the subject whenever I bring up the good old theatre days. Very sad.

Larry, Mike, Sam and all.
Thanks for remembering the old Midway Drive-In. It would surely be interesting to hear from some of the people that had worked there and cared for it over the years, but like you said, getting people together that really cared for the experience, rather than just a paycheck are two totally different things. I have just relocated to the Denver area, where we still have an operating drive-in, the 88, up in Commerce City. I am also planning an overnight trip to Nucla,CO and look up the old Uranium Drive-In. With a name like that, I have to have a peek. Thanks again.

Just had a flash memory. Our old projectionist pointed out a steel I-beam to me one night on the west end of the booth. There were shards of glass stuck in it. That’s ¼ inch plate at six feet away. Back before Lexan shields in the lamp houses, the xenon bulb was open, unprotected inside the housing. One little impurity, such as a finger print, and the bulb was history. He had one actually melt, and BLOW UP one night, blowing off the door to the housing, and sticking the glass shrapnel in the beam. As far as I know, it just might still be there. Just an old memory from an old Ozoner. Thanks again for remembering the old place. John.

If that is the Midway, what is the name of the drive-in around the corner @ Myrtle & Lily? You can still see part of the ramps.

There were some other drive-ins around Eureka, Westerner Drive-In, Bel-Air Drive-In, and Humboldt Drive-In. One of those could have been the drive-in on the Myrtle Avenue near Lily Lane. Maybe someone local to the area can do some research to clarify.

Thank you for posting the picture Ken. No idea of how it could have ended up with an Ohio tag on it, but we know different. On a sad note, the original projectionist, and the person that closed the downer for the last time here, has recently passed. He had owned the blue Moon Glo lights on top of the building, that had originated at the San Francisco ex abutilon in 1932. They are still there of last report, but sadly, Conkey is gone. Thanks for posting. It helps keep this site alive.

Does anyone have any updates on the theatre as of now? Im from the area and looking to move back and always remember them parking trailers there. I know the midway sign had a for sale sign up the last time i was up that way. Is the land for sale. Ive had a long passion for the movies and film in general and would love to see the Midway brought back somehow. I moved out of the area to go to school for and take up work in editing and would be interested in hearing any news and ideas on the subject of the midway. Any news on who owns the land and the condition of the land would be great.

Sadly, the Midway has shown its last. The projection building/ snack bar have been all but gutted and rebuilt as office space for the existing RV sales operation. The pole speaker system is no longer, all of the projection equipment has been removed, and the ramps in the lot, or the majority have been leveled. The only redeeming factor is that the screen, with its anodized aluminum sheeting, is still relatively intact. The speaker system could be replaced with an FM system, and replacements for the projectors can be had, BUT, the cost involved is prohibitive. The property is owned by the RV dealer, but the realtor sign still remains. It would take a small army to remove it. There are still a few people around that had worked there, and we are still pretty close, but only separated by distance. Funny how people of like mind can stay as close as family. That, in part is what made working at the drive-in enjoyable.