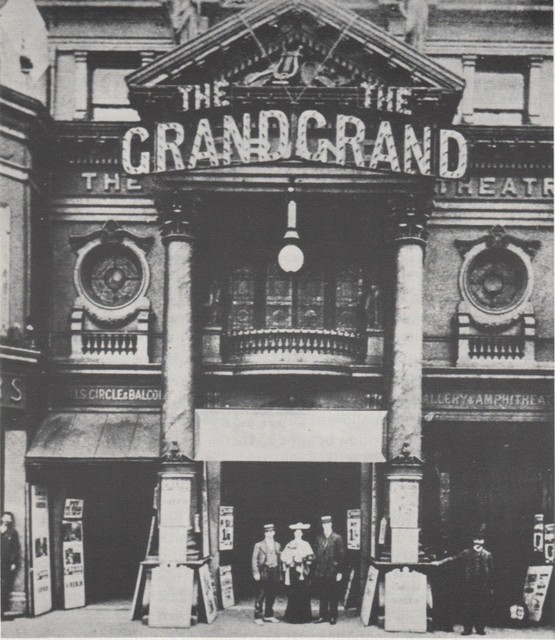 Located in the north London inner-city district of Islington. Originally opened as a concert hall known as the Philharmonic Hall in 1860, the architects were William Finch Hill and Edward Lewis Paraire. It was re-decorated and re-opened as the Philharmonic Theatre in 1874. It was destroyed by fire and re-built from a design by architect Frank Matcham which opened on 4th August 1883. This building was destroyed by fire and was rebuilt, again designed by Frank Matcham who created a 3,000 seat theatre known as the Grand Theatre which opened on 1st December 1888.

The Grand Theatre was destroyed by fire and yet another theatre was designed by Frank Matcham, with interior decorations carried out by Felix de Jong and this opened as the Islington Empire Theatre in January 1901. The facade of the former Grand Theatre was retained in the rebuilding. The Empire Theatre had seating arranged on three levels; stalls, dress circle and balcony with two boxes located each side of the proscenium opening.

Variety shows were the mainstay of the bills which also included film sequences and for a while from 1912 until 1918 it was re-named the Islington Palace Theatre before becoming the Empire Theatre again until 1931 when it was closed as a live theatre.

In March 1932 it went over to full time cinema use and was re-named the Empire Cinema after being taken over by Associated British Cinemas Ltd.(ABC). It suffered yet another fire on 7th February 1938 and was closed for repairs until re-opening on 6th February 1939. It continued as a cinema on the ABC circuit until they closed it on 10th March 1962 with Shirley MacLaine in “Spinster” (“Two Loves”) and Terry Thomas in “A Matter of Who”.

The auditorium was immediately demolished (apart from the rear stage wall) and became a car park, with entrance through the stately facade which was retained. In 1981 the facade was taken down and went to the Museum of London for preservation. A bland office block for the Royal Bank of Scotland was built on the site, but if you go around to the rear of the newly built Angel tube station, you will still see the original back-stage wall, if you know where to look!

A vintage postcard view of the Grand Theatre in 1903:
View link