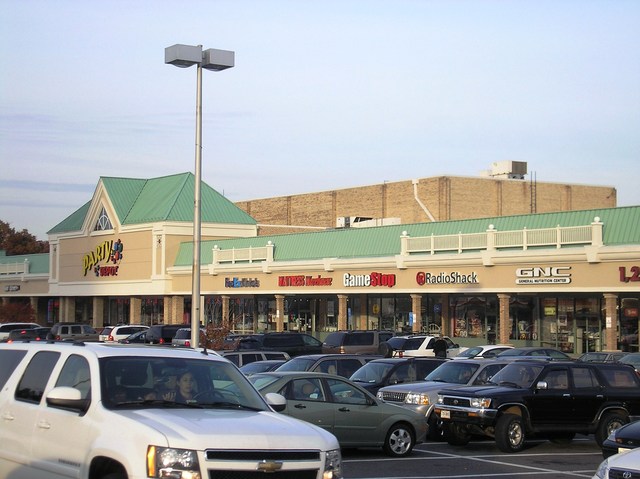 Opened December 22, 1965, this theater was located off Route 7 in the Bailey’s Crossroads/Falls Church section of Northern Virginia.

Located in a strip mall it boasted about having the largest screen in northern Virginia up until its closure. Expansive and beautifully structured, it housed one huge screen downstairs and another one upstairs.

Operated by KB Cinemas, attendence suffered from the opening of the Shirlington and Skyline Mall theaters both nearby in the late-1980’s. It switched to second run films in 1992 before closing in 1994. Though the structure itself was not torn down, the interior was gutted and several stores are now found at the location.

I always thought of the Cinema 7 as the last of the grand ornate theatres of yesteryear. Opening in the 1960s…it was past they great heyday of movie palaces yet it boasted greater than 1100 seats.

The theatre was indeed quite large and one was easily winded getting to the projection booth!

The golden drapes were beautiful. The screen rigging and front end were clearly from a day when things were done right…everything was perfectly balanced and the drape machines were built like tanks (and were huge by todays standards).

The projection equipment there was no slouch either…Norelco Todd-Ao projectors. When the theatre was twinned, they moved downstairs to say with the “big” auditorium.

I never liked the twin job much…you had this ornate theatre downstairs with 70mm and a decent picture/sound. Upstairs, the picture, while largish (around 40-feet wide) was way too dim and only mono sound.

What a grand old theatre this one was.

This was an RKO-Stanley Warner theater in 1970.

Really was a great place to see a movie. One of the places I really miss. I had wished Cineplex Odeon would have swooped this up when KB folded, as they did with a few other KB spots, but with their own Shirlington nearby, and the AMC across the street, they probably saw it as a money loser. Oh well. It probably would have only delayed things but still a shame.

The Cinema 7 opened on 12/22/65 with MY FAIR LADY which was just opening locally after playing for almost a year at the Warner in downtown D.C.

I knew this theater as the Apex Twin or something like that towards the end of its life. While there is currently a party store in what used to be the front of this theater, the large building for the screen upstairs screen can still be clearly seen from Rt7 when pulling into the strip mall. If I remember right, the upstairs screen had stadium seating and a large screen too. It was our favorite screen. It would be 10 years before I saw another movie in stadium style seats. I’m thinking it can’t be completely gutted. What could you possibly put in a space that has stadium seating floor layout? Anyway… it was my favorite place to watch a movie, even though it was run down. My brother and I were teenagers in the early 90’s and we would go here or to Loehmans for second run movies. And we’d go across the street to AMC Skyline for first runs.

This was never called the Jefferson. The Jefferson was a Neighborhood house in Falls Church. I worked there, in fact during the period when we showed “The Black Hole” This theatre was always known as the “Cinema 7”

The FedEx Office shop in the middle of this complex could possibly have some traces left of this theatre. Inside are stairs to a second level which includes what looks like a projection booth that overlooks the first level.

Saw lots of movies here. The upstairs theater was originally a balcony that was converted to a second screen to try and compete with AMCs Skyline,Shirlington,and Courthouse, as well as National Amusements 12 screen Multiplex in Merrifield. On the big screen I saw Star Trek II: The Wrath of Khan(sixth grade field trip!) as well as Aliens and Never Say Never Again. Upstairs Gremlins 2 and Coppola’s Dracula stand out.

I worked here in the early 1970s as part of a swing job including the Rosslyn Plaza and Crystal City. My girlfriend (now wife) would bring my dinner to the booth and then stay to watch the movie. We lived at Southern Towers at the time.