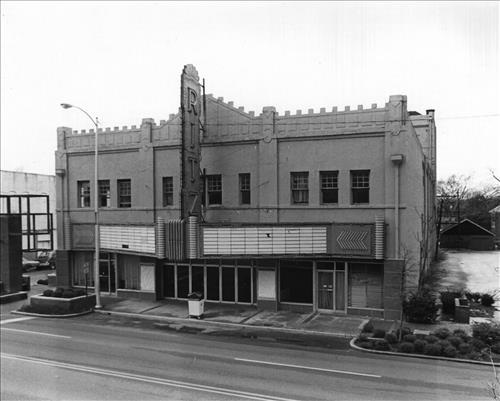 There is a picture of the Ritz, aka Lyric, on this page:
View link

Here through here are six photos from September 2006 of what remains of the former Lyric/Ritz Theatre.

Hi, I don’t believe the Ritz closed in 1955. I was in the Ritz circa 1967 when the ceiling collapsed. There were about 50 people watching Dr No in the afternoon. I believe it was in the fall and there was a parade outside at the time. It was thought the vibrations from the parade contributed to the collapse. No one died. If anyone knows anything of this, please leave a comment. I was trying to find the date. But don’t tell anyone- I was skipping school that day!

The Anniston Star of Sunday, April 7, 1918, ran several pages about the Lyric Theatre, which was set to open with a matinée program of Keith vaudeville the following day. The paper included a full-page all-text ad which read

Here is a photo of the stage tower with ghost signs reading Lyric Theatre and Keith Vaudeville.

Frank Cullen’s Vaudeville Old and New lists a Fox-Lyric Theatre at Anniston as a house on the Keith vaudeville circuit, but with no dates for its operation, so it’s possible that William Fox had control of the theater for a while.

The “New Theaters” column of the February 16, 1927, issue of The Film Daily said “Earl R. Collins has opened the New Lyric” at Anniston, Alabama. Apparently, the “new theaters” listed in the magazine were not always brand new, but merely under new management.

The ad rivest266 just uploaded was published on April 7, but other articles in the same issue of the Anniston Star, as well as the ad itself, give the opening date of the Lyric Theatre as Monday, April 8, with the first show being a matinée starting at at 2:30.

Another article in the paper says that the architect, R. L. Benz, who had but recently moved his business to Anniston, also acted as the contractor on the project.

That was fast, Joe 5 minutes later, I uploaded the Grand opening ad for October 21st, 1928 as Ritz now in photo section.