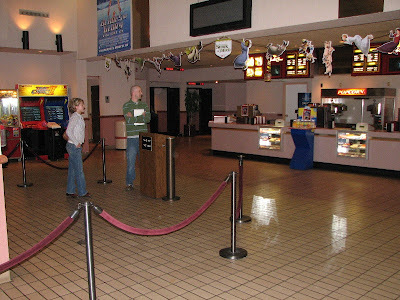 The Frontier 9 Theatre in Cheyenne opened on November 19, 2004. The theater is located in the Frontier Mall. This is a remodel of the Frontier 6 Theater. Carmike added three large stadium style seating auditoriums, along with renovations to the existing six auditoriums. I don’t know the opening date of the original theater but the mall opened in 1981.

Theater was originally was owned by Commonwealth. Commonwealth was later bought out by United Artists. Later along with the Cole Square 3 this theater was bought by current owner Carmike. Unlike the Carmike theaters in Casper and Rock Springs this location survived the chopping block when the company was in chapter 11 bankruptcy early in this decade.

Judging by photos I’ve seen (even the one on Carmike’s website) it was definitely an AMC. The signage and snack bar are definite give aways.

it’s back under AMC ownership as a AMC Classic Theater