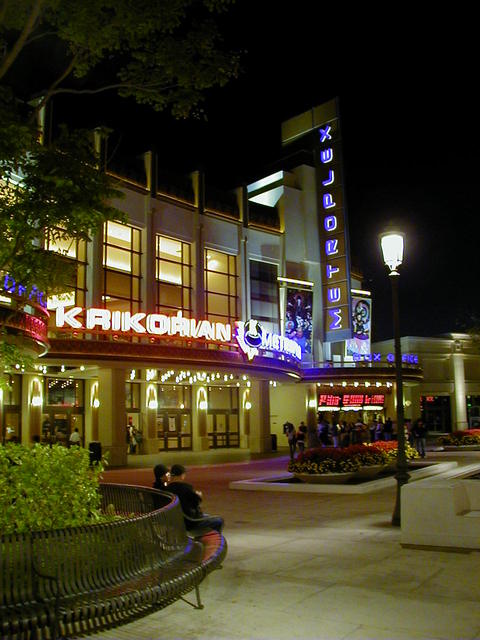 Krikorian’s Metroplex 18 was opened May 2, 2003. Built behind the Buena Park mall, as part of a mall redevelopment project, the freestanding structure sits on the former site of a JC Pennys, in an entertainment strip known as the “Buena Park Downtown”. The theatre was intended as Krikorian Premiere Theatres' flagship location and the company’s first venture in to a new style of megaplex, the “metroplex”.

With a classic movie palace inspired lobby and high end accoutrements throughout, the metroplex was planned to bring together the grand movie going experience of yesteryear’s movie palaces with the function of modern megaplexes. From imported crystal chandeliers and commissioned artwork to a custom designed Klipsch sound system and top of the line equipment, no expense was spared. At some point, the effort almost took on a “spending money for the sake of spending money” approach and several of the luxury features, such as the “sky bar lounge” never materialized as fully functional.

Unfortunately, the grand vision never lived up to attendance expectations, as the theatre has settled in to a rather average megaplex business level. Isolated behind a half vacant mall, that never kept pace with the theatre, the metroplex stands as somewhat of a wasted effort.

The building is constructed in a typical megaplex T shape, with the four large auditoriums off the lobby and remaining theatres down two hallways. The projection booth is broken in to three areas, separated by the â€œSkybar Loungeâ€. A large room is located at the end of each first floor hallway, one has been converted to a birthday party/event rental room, the other was left unfinished and used for concession storage. A surprisingly small office and employee locker area are located on either side of the expansive womenâ€™s restroom.

The four largest auditoriums, 450 seats each, are equipped with Klipsch KMX 4-T grand speakers and feature both Dolby Digital and SDDS capability.

The womenâ€™s restroom is probably one of the largest one could hope to find. Located directly behind the concession area, it runs the width of the lobby and hosts a mind-boggling number of stalls that require a full time attendant on weekends.

A cafe and customer service booth were planned for either side of the lobby, but never moved beyond the planning stage.

The enormous artwork panels that line the buildingâ€™s exterior all feature the artist (bearded man in a knit cap) and his friends. One also features the general manager of Krikorianâ€™s Monrovia location.

This is a very nice theatre, considering that UA had let the 8-plex nearby run down.

Krikorian has managed to keep the 18-plex up. I like that most of the auditoriums are fairly good sized—I never feel confined, even in the smallest ones. The sound and the presentations have been good.

The staff is friendly, though I have to say that the snack bar service is almost always sloooooow, even when there’s extra staff. It always seems like the staff could pick up the pace, especially when it costs a lot for a movie and popcorn. Other than that, nice theatre.

I agree with Jeff’s views on the mall. I grew up around Buena Park in the 1970s and can remember it wasn’t all that great back then. Sometime in the 1980s, I recall that’s when the mall added a roof. The interior became very dark and unpleasent to walk around in. Then the recent overhaul hasn’t seemed to do much good. The downstairs is still dark, and the shop selection upstairs isn’t all that great. I think if it weren’t for Wal-Mart, the mall would be history.

On the contrary, the BP mall was a popular mall in the 80s after it was enclosed. It started going downhill in the early 90s after the May Co store moved out.
I think the pictures on the outside of the theater are hideous. Paintings of classic movie stars or of today’s stars would look so much better, instead of random paintings of a movie theater AUDIENCE dressed up. Just doesn’t make sense.

This theatre recently (Fall 07') converted to digital, making it the second all digital venue in Orange County (“Cinema City”, formerly Sanborn/SoCal “Cinemapolis”, in Anaheim Hills, being the county’s first).

This multiplex was designed by the architectural firm of Perkowitz+Ruth, and pictures of it can be seen at their web site (click on their “entertainment” link.)

Buena Park is now developing another “revitalization” project, which includes a movie theatre, about two miles from this center. Located on a twelve acre property, at the corner of Orangethorpe and Beach, the 450,000+ square foot retail and entertainment complex, branded “The Source”, is slated to have a 1,200 seat cinema. No operator has been named for the theatre yet and the seating capacity suggests it will be relatively small (perhaps a luxury concept or dine-in?), but, considering the lackluster shopping complex Krikorian has to work with, any direct competition will likely be bad news for the Metroplex 18.

Hasn’t that project been in the works now for like 6 years? Will it finally get off the ground?

They have started work on the site and their first stage (I’m not sure what stage the theatre is tied in to) is slated for an early 2015 opening.

This opened on May 2nd, 2003. Its grand opening ad can be found in the photo section.

I have been going to this theater since I was a young boy! I LOVE this theater! Yes the mall surrounding it is a failed mall but this theater has charm! Test it go out in the winter stand in the court yard in front of the theater and just enjoy. And then go in and watch a movie! I’m always treated by happy smiling faces of people always willing to have a conversation. Thisbtheater is definitely something special :)