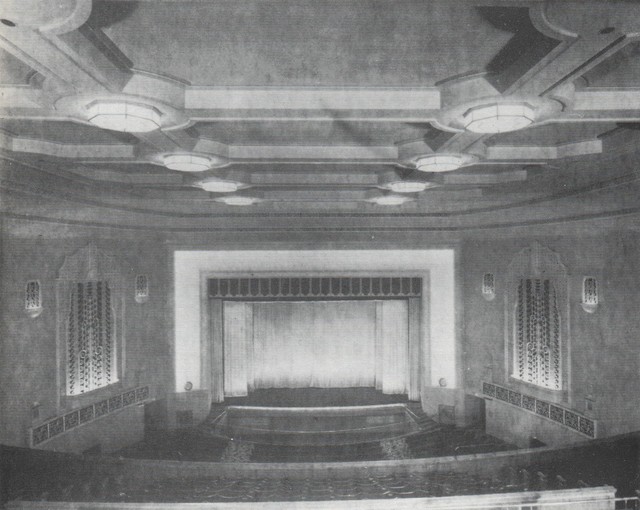 This large cinema was commissioned by R. Sokoloff and Harry Pearl of Essandee Cinemas, a small independent circuit who planned to name it the Rex Cinema. However shortly before completion it was purchased by Oscar Deutsch (of Odeon Theatres Ltd.) and after further fitting out it opened as the Odeon Theatre on 9th November 1937 with Claudette Colbert in “I Met Him in Paris”.

Designed by architect George Coles, the Art Deco style was actually quite similar to Odeon theatres which were being built at the time. The main facade was set back slightly from the street in a recess between older properties and had a slab tower, upon which was the name of the cinema. The auditorium ran parallel to the Edgware Road behind existing shops and housing. Seating was provided for 1,528 in the stalls and 842 in the balcony. There were fountain-like grille features on the splay walls, behind which were the organ chambers (make of organ installed is unknown at present). There was a cafe/restaurant provided for patrons.

The Odeon Edgware Road eventually became the North London area office for the circuit. In 1967 it was closed for twinning. The stalls area was converted into a Top Rank Bingo Club which had its own seperate entrance which had been the former stalls exits located on Church Street. The balcony was extended forward to create a 1,116 seat cinema which opened on 20th February 1968 and this used the original entrance and foyers.

The Odeon closed on 7th June 1975 with Peter Sellers in “Soft Beds and Hard Battles” and Sid James in “Carry on Matron”. Bingo remained open in the former stalls area, but the cinema lay empty and unused until it was leased out to an independent operator and re-opened on 24th March 1979 as the Liberty Cinema, screening Bollywood films. The Liberty Cinema and the Top Rank Bingo operation closed in 1983 and the former stalls area was used as an indoor market. In July 1990 the auditorium was demolished and then in November 1994 the main entrance facade on Edgware Road was demolished. The vacant land is now in use as the Church Street car parking lot.