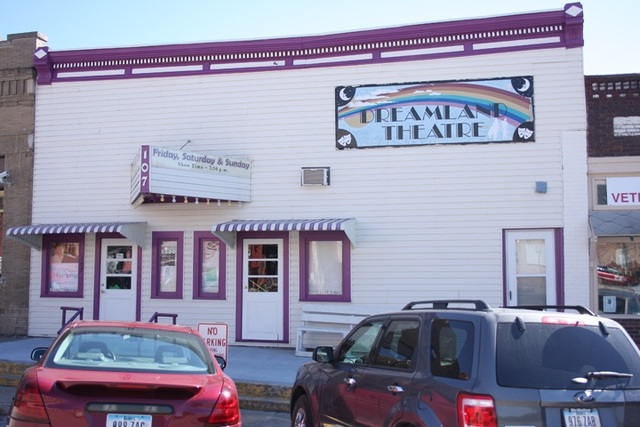 The Dreamland Theatre in Carson, Iowa originally opened in the 1920’s with a seating capacity of 300.

It was temporarily closed for remodeling around July of 2005. It had reopened again by Summer 2008.

Here is the full article. Better late than never, as they say.

Jan. 19—CARSON, Iowa—Metropolitan movie megaplexes, the cost of piecing together a broken 1938 projector and the realization that this town of 700 has become a bedroom community have led to the closing of Carson’s Dreamland Theatre.

“It was one of the oldest indoor theaters in Iowa for a long period of time,” said lifelong Carson resident Charles Hodges, who up until a few days ago was a projectionist at the theater. “I started going to the show there by myself when I was 10 years old.”

The 52-year-old Hodges remembers going to the Dreamland Theatre downtown to watch movies when popcorn cost a dime and the Dreamland would be packed every night. Hodges said some residents recall watching silent movies in the Dreamland, which is more than 70 years old.

Last week, the projector was shut down. The $2,500 estimate to fix it temporarily was too much. The theater closed last weekend.

Hodges is one of several volunteers from the Carson Business Club, which has owned and operated the Dreamland since the 1960s. Hodges said the theater, once was a moneymaker, had declined over time so that now the cost of leasing and shipping movies wasn’t being made up with $3 ticket prices. The theater was losing an average of $400 a week.

“The business club can’t run it at a loss, and that’s where they are at,” Hodges said. “It costs too much to rent the films.”

The losses, combined with competition from major theaters in Omaha, video rentals and now DVDs, just made it impossible to keep a theater going in a town the size of Carson, Hodges said.

Small theaters in southwest Iowa have struggled recently. The Grand Theaters in Red Oak closed in September, but now has tried to occasionally open for certain movies. The Royal Theatre in Glenwood also reopened earlier this winter under new ownership after shutting down a year ago.

The business club recently asked the Carson City Council to take over the theater for a $1 sale price, but the costs were too high for the city to bring the theater up to code for disabled patrons. Mayor Lyndon Taylor said it just isn’t feasible for the city to operate it, especially because the theater loses money annually.

Taylor said a variety of businesses in town have struggled to stay afloat in recent years. Farm-equipment dealers, grocery stores and taverns have closed even though some new homes have been built in the area. More often, people are doing their shopping and entertaining in areas such as Omaha, he said.

“It’s hard to be competitive with businesses when we are so close to Council Bluffs and Omaha,” Taylor said. “We are becoming more of a bedroom community.”

Joyce McClain said she became upset when she heard the theater had closed because it has been one of the few sources of local entertainment for people in Carson, as well as neighboring towns such as Oakland and Macedonia.

“I guess it just doesn’t make a lot of money,” McClain said.

Once a year, the town has a fund-raising dinner to help keep the theater going, McClain said. Now, she and others plan to meet with the City Council on Feb. 5 to ask council members to look at options for fixing the projector or applying for grants to revitalize the theater.

“They just decided they would close it rather than fix it up,” she said. “Some of us in the community are going to try to get it opened back up.”

To see more of the Omaha World-Herald, or to subscribe to the newspaper, go to http://www.omaha.com