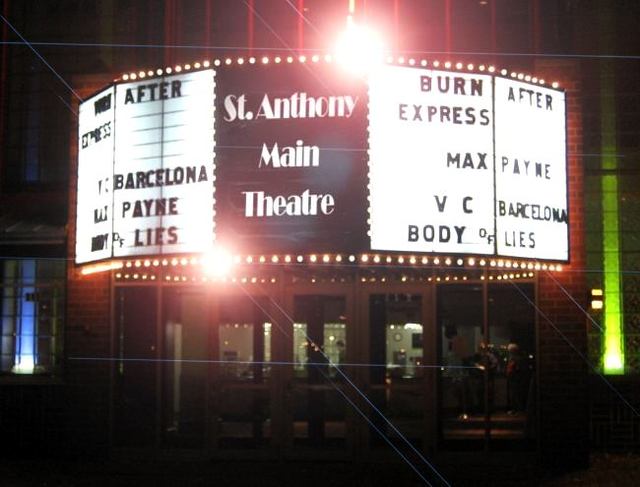 The St. Anthony Main Theatre was opened November 22, 1985 by Engler Theaters of Minnesota. It was built as part of the renovation of two Minneapolis city blocks on historic Main Street, transforming old factories and warehouses into a downtown shopping and entertainment center on the Mississippi riverfront.

S.A.M. has had an interesting sequence of ownership in its 20 years of operation. Engler Theaters went out of business before the cinema could be opened; as a result, Engler filled the new theater with most of the equipment from their older locations. Seats in #3 came from the IDS skyscraper theatre; the Century C running in #2 came from the old Hopkins 5 Theatre and most of the old mono sound systems from their other locations can still be found stored in S.A.M.

UA purchased the lease & opened S.A.M in early 1984 and operated the theatre until around 1998. At some point, UA installed a Norelco DP70 70mm projector in #1, and stereo sound in #2 and #3. The 70mm sound system and most of the other booth equipment was removed by UA. Reading Entertainment then took over the lease and had plans to redesign the theatre to become an Angelika Film Center, which unfortunately never went through. In 1999, for “Star Wars: Episode One”, the dilapidated DP70 was replaced with a new Simplex XL and a DTS-ES sound system was installed.

After a run of poor management, Reading left S.A.M. in 2003 and local shock cinema archivist Bill Carter, along with Minneapolis developer John Rimarcik, purchased the theatre under the company name Stone Arch Cinemas. Rimarcik had previously redeveloped the St. Anthony Main shopping complex into a business and restaurant center, revitalizing a dwindling interest in the site.

Under Stone Arch Cinemas, well-preserved seats from the Willow Creek Theatre were installed in #2, #4 and #5, a better projector in #5, new amplifiers throughout and major repairs to the rest of the theatre finally gave S.A.M. the first-run audience it deserved. Even despite the opening of Crown’s Block E-15, S.A.M. has remained well attended and preserved downtown, neighborhood, mall and student cinema. Move-over engagements of independent films, festivals, special screenings and Atomic Midnights are held as well.

The design for the theatre was actually laid out by the city of Minneapolis. Engler’s built the facility, but had to bow out of the cinema market, partly due to troubles with their restaurant franchises.

Old signage from UA & Reading is still present in the mall surrounding the theatre.

Some say this cinema is haunted. Anyone know anything about that?

Some corrections to dates. The story given here makes it sound like Engler never ran the place. They did, for 2 years. It opened 11/22/85 and in Nov 1987 the lease went to UA. Minneapolis taxpayers financed a lot of this boondoggle in the early 1980s.

When it opened, the theater had no on-site restrooms. Patrons walked from the ground-floor lobby through an adjoining restaurant to the set of restrooms built to serve the entire building complex. (The city allowed this through some kind of code exemption.) Patrons complained, however, and small restrooms were then installed under the staircase leading from the ground floor lobby to the second floor lobby.

Did this theater run any 70mm prints during the period of time they were equipped to do so?