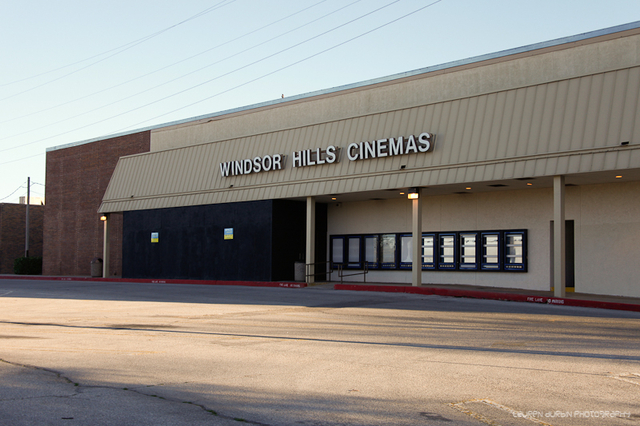 The Windsor Hills Cinema 10 was opened on December 9, 1988 by Litchfield Theatres. It was located on NW 23rd Street at N. Meridian Avenue. It was operated as a first run house. It was taken over by Regal on February 2, 1994. Closed by Regal Entertainment on January 16, 2005.

Wasn’t this operated by Litchfield, or something similar in 1990? I was last here in 2004, and was surpised as to how poor its condition had deteriorated to.

This was opened by Litchfield Theatres on December 9th, 1988

Re-opened under new management on November 20, 2009 as the Windsor 10. Story here: View link

Found on this site are color photos of the newly remodeled Windsor Mills Cinema 10,
http://www.roadsideoklahoma.com/node/483

I was working for UA Theatres corporate hq in the 1990s – don’t think this was a United Artists location. I attended a few shows here in the early 90s and never got in free!

This was opened by Litchfield Theatres. 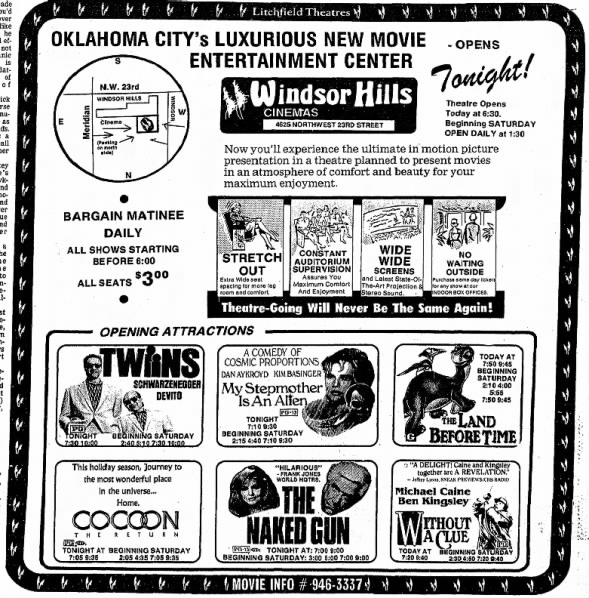 Carolina-based Litchfield Theatres Circuit, formerly Fairlane Litchfield, decided that the time was right to move into the Oklahoma City market in the 1980s. And the move was a good one because the town was overbuilt with aging twin and four-plexes without a true, modern destination theatre. Litchfield began in Edmond with the $1.4 million, 1,548 seat Kickingbird Cinema 6. The Windsor Hills was built behind the, then, 28-year old Windsor Hills Center because who needs to actually see the theatre from the road?

Litchfield’s Windsor Hills Cinema 10 represented a more aggressive attempt to break into the next generation of multiplexes and was designed by Hiller & Hiller of South Carolina. The Windsor Hills Center had opened theatre-less in the 1960s and the 1988 expansion at the rear of the complex including two retailers and the cinema. The megaplex launched December 9, 1988 with first-run films. On February 2, 1994, Regal Cinemas Inc. purchased LItchfield’s 24 theatre portfolio adding the Windsor and the Kickingbird. Regal marketed the venue as the Regal Windsor Hills 10. Citing lack of patrons, Regal closed up shop there on January 16, 2005.

Hoping to squeeze out a few more dollars - one at a time - Western Pacific Theater Group headed by Charles Boenning took on the Windsor Hills Cinema 10 as a sub-run, discount house on June 10, 2005. It was Western Pacific’s third Oklahoma theatre with locations in Hawaii, California, Texas, and Nevada. The policy was ultra-discount with cheap concessions and prices ranging from $1.50 down to 50 cent Tuesdays. Patrons were skeptical and Western Pacific moved along.

B&B Theatres Circuit took on the venue in 2009 and gave it a facelift while elevating it back to first-run status beginning on November 20, 2009 as the B&B Windsor 10. It was closed on August 25, 2019.. This was kind of an interesting move as few theatre circuits invested so much money in the 21st Century on a multiplex that featured non-stadium seating. But it worked out and the theatre was a plucky survivor all the way to the end of a ten-year lease. Few seemed to notice that it was gone and in the 2020s it appeared ready for anyone to take it over.