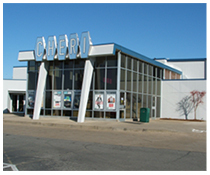 HERE IS THE CINEMA HOMEPAGE http://www.moviesinmurray.com/

I was in Murray a couple of times with the owner of the theatres here, Tommy Brown. At that time, there was a twin theatre in a strip shopping center, then name of that theatre was the Cheri 1 & 2. The Capri, at that time, had either 2 or 3 screens, which is the site for the current megaplex by addition. I’m sure the Cheri in the shopping center was closed. I’m guessing they changed the name of the Capri to the Cheri sometime in the 80’s or 90’s.

In 1967 Tommy Brown opened the theater (then named the Capri, then the Capri-Cheri and eventually to the current name of Cheri Theatres). When he retired in the ‘80s, Mr. Brown sold the theater to his brother in law, John Hopkins (who worked for Mr. Brown at the time) and Mr. Hopkins still owns it and runs it with the help of his sons. The theater has had many renovations to keep it updated and modern – it was one of the first theaters to add not only stadium seating, but digital projectors. They also added 3D technology, but the owner listened to his customers and no longer plays 3D movies because of how dissatisfied they were with the movies being released. This theater is known for its family feel, low prices (currently $8.00 for adults and $6.00 for matinees), and it’s cleanliness. They also handle problem customers and have no tolerance for cell phones, asking people to leave if they are disruptive. I’ve always been very happy with the movie experience when I visit the Cheri – especially with how clean it is! By the way, the current Google map image does not show the theater – it is a picture of the back parking lot. The theater itself is further to the left and can’t be seen in it’s entirety from this angle.