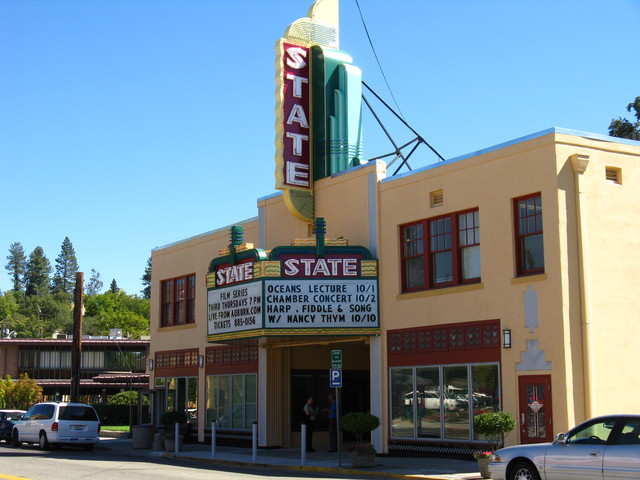 The State Theatre opened December 26, 1930 with Marilyn Miller in “Sunny”. It was a T & D Jr. Enterprises theatre with an Art Deco motif and a seating capacity of 1,325. It was converted from a single screen theatre to a duplex in 1972 at which time the balcony was converted into offices.

In March, 2006 the State Theatre was purchased by The Auburn Placer Performing Arts Center, Inc., a local non-profit group. APPAC plans to reconstruct the State Theatre as a local performing arts and cultural center that will be home to the Auburn Symphony and feature a variety of entertainment types. The intent is to stay as closely as possible to the historic layout, including a reconstruction of the balcony.

In June 2008 the facade was restored to its 1937 likeness and a marquee and vertical blade sign installed. It reopened in October 2014.

This would appear to create an odd situation for the theater’s entry on CT as the article indicates that the owner has copyrighted the name “Old State Theater” and apparently intends to use it as the name of her relocated cinema. I think this theater’s status should now be, or soon be, closed.

Southwest Builder & Contractor, issue of March 28, 1930, said that architect Rudolph Falkenrath, Jr. had been authorized to proceed with the final working drawings for a 1200 seat, reinforced concrete theater building to be built at Auburn, for the Auburn Amusement Company.

Here’s an article that updates the status of the State Theater in Auburn: View link One of the two auditoriums has been renovated, and new 35mm projection installed. The eventual plan is to return the theater to a single auditorium. Movies are being shown again along with live performances. The State is now owned and operated by the Auburn-Placer Performing Arts Center and the official website is now: http://www.livefromauburn.com/index.htm

It was not converted to a duplex in 1972. The balcony WAS converted to offices at that time, but the screen wasn’t split until years later. I know, because I went to see movies there as a child. I remember the big velvet curtains pulling back before the films would start…and I wasn’t born until 1973. ;)

“Auburn Placer Performing Arts Center (APPAC) has launched a fundraising campaign to expand and upgrade the State Theatre at 985 Lincoln Way, in downtown Auburn. This work will include removing the center wall that currently divides the theater, increasing seating capacity from its current 130 seats to 275 seats, reopening and upgrading the original proscenium and stage, rebuilding the green room beneath the stage, and making American Disability Act (ADA) improvements to a restroom and stage access. A very exciting aspect of this project is the cost: an estimated $300,000.

“Upon completion in mid year-2014, we will be able to provide an expanded and improved facility that will serve our community far better than our current theater does” said Paul Ogden, President of APPAC. “This will allow us to attract entertainers who require a larger venue and to provide more variety to our audiences. This is the next logical step to build upon the solid foundation we’ve built. We believe this is a needed community project with significant cultural and economic benefits”.

The Auburn Placer Performing Arts Center (formally the State Theatre) reopened in October 2014 with the planned improvements as detailed in the post above this one completed. Six year old seats formerly installed in Hollywood’s Chinese Theatre were also purchased and installed.

I posted a wider image of the Joel Windmiller photo. Still can’t make out the films on the marquee though.