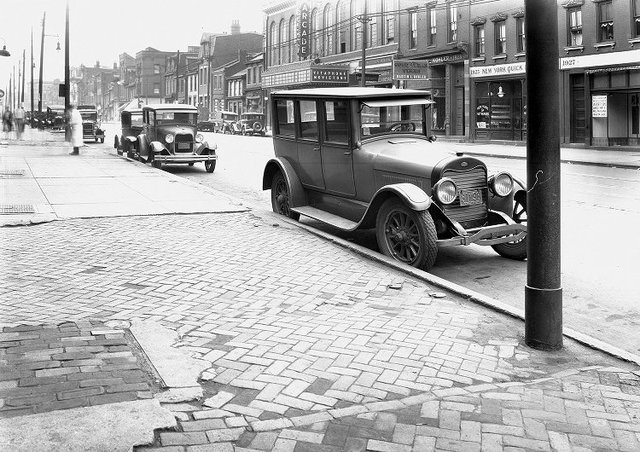 Opened in 1929, the Arcade Theater was the first theatre outside of downtown Pittsburgh to have sound and air-conditioning. The Arcade Theater burned down in 1984 and an Eckerd pharmacy sits on the site of the theater.

The Arcade was in fine shape when it burned – it was one of the buildings that fell victim to a serial arsonist.

The southside arsonist did not burn this theater down. The owner turned out to be the one who torched it. I was a teen and my dad was an electrician. I went with him on a bid to rewire the theater and I loved being in the arcade alone. I thought it was cool. They had secret rooms up in the balcony area

The Arcade was at 1915 East Carson Street.

It was an ordinary neighborhood theater until owner Stanley (“Zundy”) Kramer took great pride in turning it into an art house. Although he once played a series of film classics that included “Good News,” most of the Kramer-Arcade years hosted such independent and foreign films as “I Sent a Letter to My Love,” “The Tin Drum,” “`Breaker' Morant” and “Sandakan 8.”

Jean-Luc Godard made an appearance here for one of his movies.

Zundy Kramer took great pride in the prestige associated with running a local art theater and seemed to distribute as many passes to local dignitaries as he sold tickets.

The fire that destroyed the theater robbed the South Side community of a significant asset.

Dorothea Abbott, cashier at the Arcade Theater, south side, at a police standup, identified Thomas Murray, 45, as the gunman who held up the theater January 29 and made off with $45. He was held on a charge of armed robbery despite his denials that he was the bespectacled gunman.

Looking for information on the building, which is still standing, 1923 east carson st.

If anyone has any information on this building please let me know.

I miss visiting the Arcade. Final owner Stanley “Zundy” Kramer still lives in the area. Nice guy. And a true “character” in the traditional sense of colorful people who are quoted and remembered favorably.