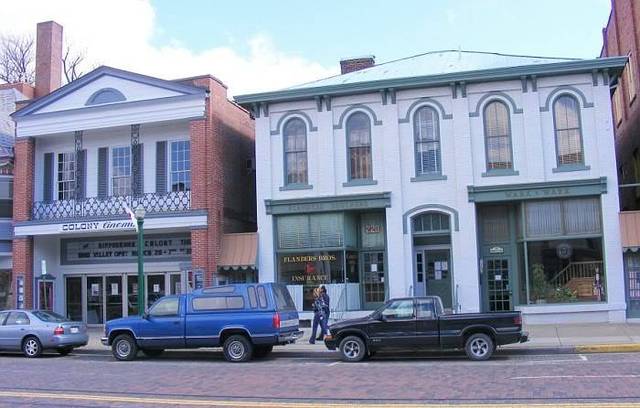 Originally opened as the Hippodrome Theatre in 1911, and featuring vaudeville companies and early silent moving pictures accompanied by piano, the 600-seat theatre was razed just eight years later and moved a few blocks away to a new home in a much larger, far more grand theatre. The New Hippodrome Theatre (or ‘New Hipp’, as it was nicknamed by Mariettans), opened in 1919 amidst great fanfare and large crowds.

The New Hippodrome Theatre featured one of the largest stages in the Midwest, amidst Neo-Classical splendor. It also was home to an Echo pipe organ, a dual set of projectors and a then-cutting edge refrigeration system. Its orchestra pit could hold fifty performers, and its balconied auditorium, which sat over 1,200, had perfect acoustics and clear sight lines.

In 1949, the theatre’s new owners, Shea Theatres, spent more than $50,000 remodeling and modernizing the New Hippodrome Theatre to the plans of architects Charles M Stotz & Edward Stotz. It was given a new façade, in an austere Colonial Revival style and new carpeting, paint, stage curtains, and modern projection equipment. Later that same year, the theatre was renamed the Colony Theatre and reopened with the Esther Williams MGM musical “Neptune’s Daughter”.

In the 1940’s, 1950’s and 1960’s, which were the Colony Theatre’s greatest days, some of Hollywood’s biggest names made appearances on its stage, including Frank Sinatra, Judy Garland, James Stewart and Boris Karloff. In 1957, the Colony Theatre made national news when it hosted the premiere of the Rock Hudson starrer “Battle Hymn”, in which Hudson played Marietta native Col. Dean Hess.

From the early-1970’s until 1985 the ownership of the Colony Theatre changed hands several times. In 1975, the lobby was severely altered when a staircase was removed in favor of a new concession stand, and a failed boiler nearly forced its closing in 1980. It remained open under the ownership of local businesswoman Majorie Bee another five years, before closing its doors in 1985.

In 1989, the Colony Theatre was acquired by Dan Stephen, Jr. in hopes of restoring it to its former glory as a performing arts center, but serious plans for its rebirth did not come together until 2001, and the first phase of a two phase restoration project is finally expected to begin in January 2002.

In July of 2001, the old Hippodrome Theatre’s gorgeous original asbestos fire curtain was rediscovered after being lost for decades, and plans are to restore it, encapsulate it (to capture the asbestos fibers), and feature it predominantly in the restored Colony Cinema. In 2016 it was renamed Peoples Bank Theatre.

Modern photo at this link:

Please note: The photo linked to above is NOT the Colony Theatre in Marietta, Ohio. The Colony’s website can be found at www.colonytheatre.com Thanks.

Yes, both the photos from 11/12/05 and 5/19/06 are the Colony. And “Cinema” and “Theatre” are both technically correct. The theatre was renamed in 1949 as “Colony Cinema”. But over the years it is just referred to locally as The Colony Theatre.

Must have been playing “THE BIG CHILL” second run,since it came out in 1983.Nice pictures.