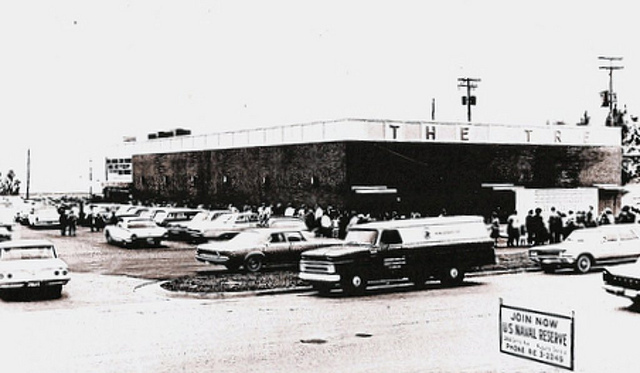 This theater was originally owned by the Georgia Theatre Company. It opened on September 25, 1964 with the hit Disney movie “Mary Poppins”. Along with the National Hills Theatre in Augusta, it would play a lot of Disney product. The theatre was built with a small lobby and concession area. Many times moviegoers would have to wait outside.

Projectionist Bob Smith remembered playing “Walkabout”, an Australian film that was rated PG and had full frontal nudity. He lobbied the manager to change the rating to an ‘R’ as he knew he would be the first to go when the cops saw such a movie with a PG rating. However, the manager let the rating remain a PG. Even though “Billy Jack” contained full frontal nudity, PG pictures of the 1970’s were much different from PG movies today.

I saw “Freebie and The Bean” there along with “Thunderbolt and Lightfoot”. “The Tamarind Seed” with Julie Andrews packed the ladies of the garden clubs in. I also saw “True Grit” and “Network” along with countless others.

In 1977 Daniel Village Theatre was twinned which ruined the theatre. There was such a rush in those days to twin or triple any theatre. It reopened as a twin with “Smoky and the Bandit”.

One thing I hated about this theatre was that there were no doors going into the auditorium. If you were anywhere near the back row you heard the popcorn popping and the concession stand girls talking. I believe when they twinned it they finally put doors up. But it was a lousy design to begin with without any doors.

The theater was purchased in 1987 by United Artists, finally closing in 1993.

I uploaded the April 2nd, 1965 grand opening ad in the photo section.

thanks ,I have the paper from that day.

I loved this theater. It was so comfortable. I remember seeing Dances with Wolves here and they just cut off the movie in the middle. Time to buy more concessions!

YOU GOTTA BE KIDDINg, did it come with an Intermission or not.well it was a Dollar house.

I lived a few blocks from the theater in 1966. The house for whatever reason is now gone, it’s an empty lot and now I see the theater has been gone for many years as well. I saw “With Six You Get Eggroll” and a few other movies there. My dad was stationed at Fort Gordon so we watched some movies at the fort, but the only other theater we went to was Daniel Village Rocking Chair Theater. Rocking Chair certainly gave it some charm.

Fort Gordon had new Theatre built .now it is used for Plays..

just added this theatre on Facebook, even though I never worked there a lot of locals were wanting it added, still wish I had more pictures of the theatre itself.

hoping to get pictures from an ex manager on here..

talking with faye mcnair and she managed for 25 years,said one night TV STAR and singer ANDY WILLIAMS attended a movie….word got out and the lobby was full of fans when he came out after that show..