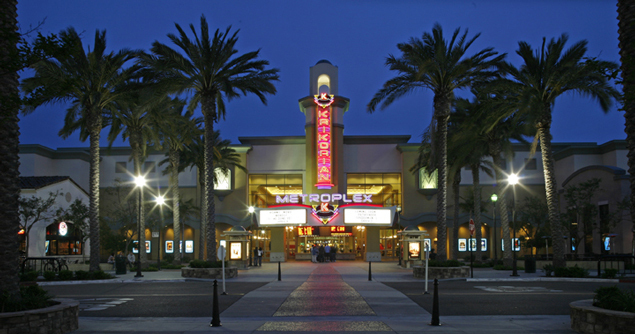 Opened on November 5, 2003 by Krikorian Premier Theatres. It was taken over by Cinepolis Luxury Cinemas on February 11, 2015.

The Vista theatre is basically a scaled down version of the Krikorian Buena Park 18. The exteriors are different, but the interior design/layout/decor of the Vista Theatre is almost exactly like Buena Park, just on a smaller scale.

An oddity of this theatre: for reasons that escaped everyone, a door, that leads nowhere, was installed in the building. As an inside joke, the opening gm had a plaque placed on the door that read George’s (as in owner George Krikorian) office.

Stumbled upon this today:

From the North County Times: http://www.nctimes.com/news/local/community/north-county-community-news/article_a9723a91-d1e7-54e9-a314-0ce807f5befc.html

VISTA — Movies, popcorn and soda for $1 will be featured all day Nov. 15 at the new Krikorian Metroplex Vista Village 15 Theaters, off the Vista Village Drive exit at Highway 78. All proceeds from the Saturday event will go toward the North County Times' Newspaper In Education program, which brings more than 1 million newspapers into local schools each year to keep children up to date on community and world issues. Movies scheduled to be shown at a $1 admission price include “Bruce Almighty,” “2 Fast 2 Furious,” “Daddy Day Care,” “Tomb Raider 2,” “XMen 2,” “Down with Love,” “Shrek,” “Chicago,” and “Frida.” Film selection is subject to change. The box office opens at 11 a.m. For show times, call (760) 945-SHOW or log on to www.krikoriantheatres.com.

VISTA — The curtain rises this weekend on a key tenant of the Vista Village entertainment and shopping complex — the 15-screen Krikorian Metroplex Movie Theatre.

The Saturday opening marks the first in a list of revitalization projects as Vista attempts to spruce up its downtown following more than 15 years of planning, preparation and building.

More work is needed to complete city officials' overall vision for Vista Village — including the construction of shops directly in front of the theater, finding more tenants to fill empty storefronts, and building restaurants along the complex’s Creekwalk Park, a stream and walkway near the theater.

Despite the long road ahead, the theater’s opening is creating a buzz throughout City Hall.

“It’s exciting; we have been looking forward to this for a number of years,” said Mayor Morris Vance. “I think the community is going to be pleased with what they see. (The theater) is the anchor for a revitalization of the downtown … for the downtown to be successful Vista Village needs to be successful.”

The Vista Village complex has cost about $117 million in public and private investments, including improvements to the surrounding streets to handle the increase in traffic.

On Tuesday, the site off Vista Village Drive and South Santa Fe Avenue was a construction zone.

At least 100 workers, shovels and pickaxes in hand, were planting trees along the complex perimeter.

Along the strip of shops north of the theater, workers installed signs, screwed in doors and cabinets, and reviewed blueprints. A few of the shops remained empty and barren. Signs posted in windows demanded that workers ensure all trash, tools and bins be “picked up by 5 p.m. Tuesday — no exceptions!”

Underscoring the workers' feverish pace is the need to fix up the complex in time for the weeklong series of events starting Saturday that will tout the theater’s grand opening.

While the theater is opening this weekend, other Vista Village shops are not. City officials have said the rest of the shops, including Panda Express, Starbucks, Juice Zone, Perfect Nails, Coldstone, La Salsa and Nextel, should open in December.

An owner of Great Clips, a store in the complex, watched the construction continue Tuesday and said he’d like to open as soon as next week but is waiting for utility work.

Vista resident Joann Hurley said while working at a restaurant near Vista Village that she is not a big movie person but looks forward to checking out the Krikorian lobby.

“It’s a good addition to Vista,” Hurley said. “We need a movie complex here, I think the closest one is in (San Marcos). It will be very interesting to see if it pulls in the business that they expect it will.”

The theater’s special events begin with $1 movies, popcorn and soda to benefit a Newspaper in Education Fund on Saturday and the Vista Unified School District on Sunday. Movies shown during this weekend’s charity events are recent hits but not current releases.

Other events throughout the week will lead up to the official opening day Nov. 21 and the “Hollywood Comes to Vista” event Nov. 22, in which about 10 TV actors will attend a red-carpet movie screening of the new film “Cat in the Hat.”

“The theater is three years in the planning, one year in the building and six months in the marketing,” said Randall Blaum, Krikorian spokesman.

Despite the fast-paced construction and last-minute preparations for Vista Village, Blaum said he is sure the opening will go smoothly and that the theater is “ready to go.”

“We actually do anticipate a very smooth transition into the opening,” he said. “Part of the reason we do these charity events is to obviously help charities but also to ‘work out the kinks, help us get trained.’ ”

The Krikorian Metroplex Movie Theater is hosting a series of events before its grand opening Nov. 21. Call (760) 945-SHOW or visit www.krikoriantheatres.com for more information.

No, it’s not a new Las Vegas hotel, it’s the movie theater under construction in Vista.

Boasting some of the largest auditoriums in North County, curved screens for “perfect viewing,” and “ultra-plush, high-back, rocking chairs with stadium seating,” the 15-screen “Krikorian Metroplex Movie Palace at Vista Village” promises to take the theater-going experience to a new level.

But like a potential summer blockbuster, the big question is — will it deliver?

The theater is part of a downtown redevelopment in which the city and private developers have invested about $117 million for the Vista Village complex, including improvements to the surrounding streets to handle the increase in traffic.

Scheduled to open in early November, the entertainment center off Vista Village Drive will offer shops and restaurants. Within a couple of years, upscale eateries will line a meandering stream along the project’s Creekwalk Park.

The Krikorian Metroplex, however, is considered by many to be the complex’s main attraction. A theater representative said Thursday that the opening day is Nov. 5, adding it conveniently coincides with the release of the third installment of “The Matrix” trilogy, an anticipated box-office smash.

If you build it, will they come?

City officials have said they believe a classy movie theater built in the center of town will draw not only Vista’s 90,000 residents, but people from other parts of North County, too.

“Krikorian is a quality guy,” said City Councilman Bob Campbell. “People are going to walk into that lobby and go ‘wow.’ He puts a ton of bucks into a high-quality image, and I have no question they’ll be running a high-quality (show).”

“I think the demand is definitely there,” the councilman added. “If you go out to San Marcos on any given weekend it’s just jammed.”

Indeed, two Regal Cinema multiplexes, an 18-screen theater in San Marcos and a 16-screen theater in Oceanside, flank the city and often draw Vista residents out for the latest two-hour escape from reality. On the weekends, lines of patrons queue up outside the theater waiting to get tickets to a show.

Yet just three years ago, Edwards Cinema backed out of negotiations to build a similar theater at Vista Village, prompting city officials to reach out to Krikorian Theatres.

“(Edwards) did a feasibility study that showed that economically it wasn’t going to work,” said former San Diego County Supervisor and 2002 Vista mayoral candidate Paul Eckert. “Of course, that was at the time when the economy was starting to go to hell in a handbasket.”

“I don’t consider the one in Oceanside as having been successful, and the one in San Marcos and Vista are going to split (ticket sales),” he said. “I just think there are a lot of unanswered questions, and only time will tell.”

If Vista’s new theater is successful, that means an increase in sales tax is funnelled into city coffers.

Todd Cummings, Krikorian’s director of operations, said he expects the theater to be “highly successful.”

“We are going to build a beautiful theater, and there is nothing in North County to compare it to,” he said. “I don’t want to say anything negative about other theaters in North County (but) look at the material we use — all granite floors, hand-painted murals on the walls, high back chairs with rocking mechanisms … better customer service … real butter in our popcorn.

“We try to build an experience, not herd you in and out of the theater. We don’t bombard our patrons with advertising.”

Neither Cummings nor Kathy Baker, a project manager with the city, would offer details on how much is being spent to build the theater, or how much rent the private developer, Vista Village LLC, will charge Krikorian each month.

Randall Blaum, Krikorian’s director of marketing, said “we are not releasing the final costs (but) it’s a multimillion-dollar project.”

“It’s all product driven,” Cummings said. “Profit is based on the quality of movies. You can have the greatest theater in world,” but blockbusters are what rake it in for theaters.

Blaum and Cummings said they are sure the quality of Krikorian’s movie theater will tend to make people come to Vista to watch new releases.

“This is the grand movie palace of this century, and I promise that is not marketing spin,” Blaum said. “It is awe inspiring.”

A final ticket price for general admission has yet to be determined, “but our ticket prices will not be one penny higher than nearby competitors, including concession stand (prices),” Blaum said.

Following the party, a week’s worth of special events is planned, leading up to the Nov. 5 official opening, Blaum said.

“We’ll have special charity events, (including) dollar movies and free popcorn and soda,” he said. “Who wouldn’t want to go spend some time there?”

Baker said people should go to the theater just to check out the lobby.

“(City officials) went to a Krikorian Theatre up in Orange County, and it is unbelievably beautiful,” Baker said. “The carpet, the lobby, they are a top-notch theater, and you don’t even have to buy a ticket to enter the lobby.”