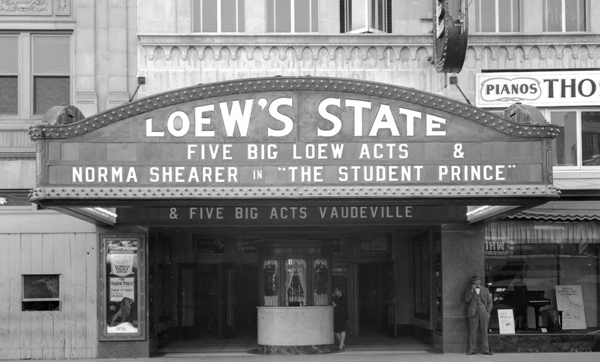 The Houston Loew’s State Theatre closed on October 15, 1972 and was demolished soon after.

From the early 1930s a postcard view of the Metropolitan and Loewe’s State in Houston.

“WILD ROVERS” and “LAWMAN” playing side by Side.two great westerns on large screens,love the 1971 picture wish the other Theatre was on it.

Nice shot of the Loew’s State verticle blade and the Metropolitan marquee showing “The Ten Commandments” on a recently broadcast episode of The Burns and Allen Show entitled Going to Houston (original airdate 3/25/57.)

EnnisCAdkins on August 12, 2008, wrote: “According to several articles I’ve read regarding Houston theatres, GONE WITH THE WIND opened at the Loew’s State in early 1940 and played for over a year in that one theatre. It then moved over to the Kirby for several more months.”

Which articles are making that outrageous claim?

Ennis… Here is the link to a “Gone With the Wind” article I put together that includes an entry for the Houston run at Loew’s State. As you’ll see it played a 4-week run in February-March 1940, no where close to the year+ claim others are making.

1942 photo added. GONE WITH THE RAIN – A crowd gathers in front of the Loew’s State Theatre in Houston on a rainy day in February, 1942 to see GONE WITH THE WIND.

The film, which was originally premiered on December 15, 1939, was the top grossing film of thye year and won eight Academy Awards. In 1942, the producer, Davis O. Selznick liquidated his company for tax reasons, and sold his share in Gone with the Wind to his business partner, John Whitney, for $500,000. In turn, Whitney sold it on to MGM for $2.8 million, so that the studio owned the film outright. MGM immediately re-released the film.“ Photo credit: Dolph Briscoe Center for American History.